Home / Africa / Botswana / The animals of the Kalahari: suricate and mongooses 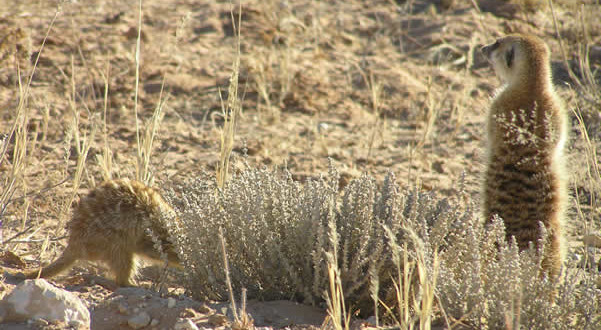 The Kgalagadi Transfrontier Park presents a wide variety of animals on this page are presented suricate and meerkats living in the park.

The suricate (or meerkat) are small mammals widespread in southern Africa in areas of desert and semi-desert of the Kalahari (Namibia, South Africa and Botswana), live mainly in the plains covered with shrubs and open and sandy land. The meerkats are diurnal animals, which weigh around 1 kg and are about 35 cm long (excluding tail which varies between 15 and 20 cm in length), have a fur on the back grey brown with yellow and shades of brown stripes; paws on the hair is white or greyish silver; near the mouth, chin and cheeks are white; around the eyes have a black circle; of the same color are the ears and round the tip of the tail, his mantle is coloured in so mimetisme with the ground surrounding clear and dusty.

The suricate live in colonies that can reach 40 individuals, the tane dig in the soil, which are real city with many underground entrances communicating with each other underground, these galleries are often shared with other species, such as mongoose or squirrel of land. The suricate not never too away from the lair, the animal hunting with a surprising ability, while the group has one or more individuals to remain standing sentinel, with the aim to alert others of potential dangers approaching.

They are essentially insectivores, but also eat lizards, small rodents, small birds, eggs, snakes, scorpions, spiders, grubs, fruit, roots, berries and tubers. The suricate reproduce on average three times a year, after a pregnancy of 11 weeks, each of three litters per year of 2 to 5 children. It reaches sexual maturity at about one year, while its life expectancy is 12 years. Its natural enemies are the raptors, Jackal and African wild cats. 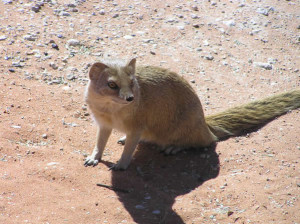 The Yellow Mongoose is a small mammal that lives in desert areas of the Kalahari and Namib and in the arid areas of South Africa (Namibia, South Africa, Angola, Zimbabwe and Botswana), especially in the great outdoors semi-desertic where the grass is short, and grasslands.

The Mongooses are diurnal animals that lead solitary lives or family gathering in groups of about 20 workers, live in tane dug underground and sopesso live alongside with ground squirrels or meerkats. The animal is small has a weight of about 500-700 grams and is 50 cm long, has a long cloak of yellow or reddish and a long tail, with a distinctive white tip.

The Yellow Mongoose is carnivore eats mostly insects, larvae, small rodents, frogs and small mammals, but also feeds on lizards, snakes and all sorts of eggs. It reproduces between July and September, and between October and December gives the light from 2 to 5 small, the duration of their lives is about 10-13 years. His main enemies are the big birds of prey, Jackal, Hyenas and Leopards.

The animals of the Kalahari: the gazelles. 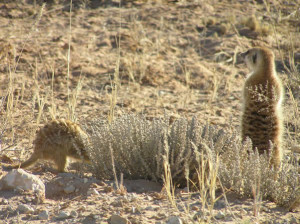 2013-12-14
admin
Previous: The animals of the Kalahari: the gazelles
Next: Namaqualand: the blooming desert of South Africa