Home / South America / Bolivia / The climate of Bolivia: when to go to Bolivia

The climate of Bolivia: when to go to Bolivia

Bolivia climate varies dramatically between different regions of the country, although the whole Bolivian falls entirely in the tropical area, climate is affected greatly by differences in height and in precipitation. For example, the average annual temperature in La Paz, situated at 3,697 m, is about 8°C, while in the city of Trinidad in the Bolivian lowlands is about 26°C. In Bolivia the hot and humid season is summer, between November and March. While the winter months between April and October are dry and cold. Bolivia may be visited throughout the year, but the best season for travel is the fresh and dry period between April and October.

The Highland region (Altiplano) is the highest area of the country, is located between 3,100 meters and 4,500 meters high, it includes the western part of Bolivia including La Paz, Lake Titicaca, Oruro, the Salar de Uyuni. The climate of this area is cold semi-arid with cold winds that blow throughout the year. Temperatures during the year vary between 22°C and 15°C during the day, while overnight temperatures often reach below freezing. 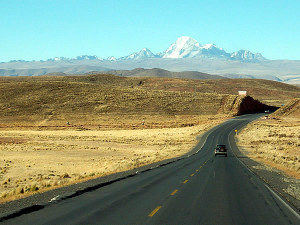 The rainy season is during the months between November and March, while the winter months between April and October are dry, sunny and cold, with bright and clear skies. The capital La Paz, for example, has an average annual rainfall ranging between 500 mm and 600 mm. This area of the country can be visited throughout the year, but the best months are between April and October with sunny and calm skies.

The climate of La Paz.

CLIMATE OF THE CORDILLERA CENTRAL

Towards the east of the plateau (Altiplano) region are the valleys of the Central Highlands, the area where there are the cities of Cochabamba, Sucre, Tarija and Potosi, this is the area of Bolivia with the best climate, it is a type of climate similar to the Mediterranean. Temperatures are mild during the day and vary between 17°C and 27°C, the nights are cool.

CLIMATE OF THE YUNGAS VALLEY

The area of the Yungas valley, which occupies the eastern slopes of the Andes with an average height between 3,500 and 1,000 meters, has a semi-tropical climate, which is becoming increasingly hot as you descend height towards the eastern tropical low lands.

The rainy season is during the months between November and March, with an annual average of 1,500 mm of rain. In the north-east, the rains are especially intense between March and April, while moving into the southern plains of the climate becomes drier. The best time to visit this area is the dry season between April and October.

CLIMATE OF THE TROPICAL LOWLANDS

The climate in the eastern tropical low lands of Bolivia is hot and humid, the area of the country spans more than half of Bolivian territory. The climate of the area north-east of the Andes, in the regions of Beni and Pando, is hot and humid with heavy rains especially between October and May, Trinidad for example, has an annual average of 1,800 mm of rainfall, the maximum daytime temperature averages are around 30°C throughout the year.

The extreme south-eastern region of Bolivia, the Gran Chaco, the area which borders with Paraguay, Argentina and partly with Brazil, has a semi-arid climate, the rains fall only in the months between December and March, while during the rest of the year the climate is dry with an average rainfall ranging between 500 and 900 mm annually. The temperatures are very hot during the day between 30°C and 40°C, while during the night can even get below zero.

WHEN TO GO TO BOLIVIA

The highlands of Bolivia: landscapes of another planet

The climate of Santa Cruz de la Sierra: when to go

The climate of La Paz: when to go to La Paz

Bolivia tourist attractions: what to see in Bolivia