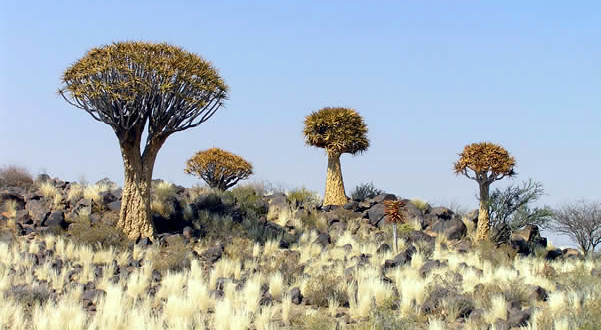 Namibia used to be a German colony and was later administered by South Africa. The capital of Namibia is Windhoek. The country has one the world’s lowest population densities, which amounts to 3,2 inhabitants per square km as of 2018.

The coast of the Atlantic Ocean, which extends to a length of more than 1,500 km from the mouth of the Cunene in the north to the Orange River to the south, has a sandy lowland formed by the Namib desert, which stretches inland for a depth of over 100 km.

A SERIES OF DESERTIC HIGHLANDS

The central part of the country consists of a series of arid plateaus with heights between 1,000 and 2,000 metres of altitude, which slope down toward the depression of Etosha Pan to the north, to the Kalahari Desert to the east, to the Orange River to the south and to the Namib Desert and the coast of the Atlantic Ocean to the west. The central plateau in some places exceeds 2,000 metres, reaching the highest elevation by the Brandberg mountain with 2,606 metres, the highest peak of the country. 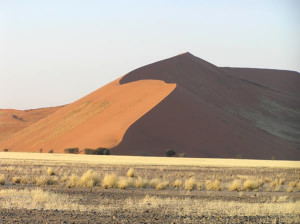 A COUNTRY WITH LARGE MINERAL RESOURCES

From the economic point of view the country is rich in mineral resources especially diamonds. There are large quantities of uranium, gold, copper, tin, zinc, manganese, lead, cadmium, vanadium, silver, salt and phosphate. The breeding of cattle, sheep (karakul sheep), goats and poultry is worth mentioning. Another important economic resource is fishing, of which Namibia occupies one of the first places among African states. Thanks to the cold Benguela current Namibian waters are home to some of the richest fishing grounds of the world. Fishing is mainly done for anchovies, sardines and mackerel.

Due to the dry climate agriculture is only extensively developed. Besides cattle grazing maize, millet, sorghum and wheat is cultivated to a modest extent. The industry is scarcely developed. The few industrial enterprises focus on the processing of mineral products, fish and livestock.

TOURISM IS AN IMPORTANT ECONOMIC SOURCE

Tourism is an expanding business and thanks to the amazing desert landscapes eco-tourism is particularly developed. There are many protected areas including national parks like the Etosha N.P., the Namib-Naukluft N.P., the Waterberg Plateau Park, the Fish River Canyon Area as part of the /Ai-/Ais Richtersveld Transfrontier N. P. and the Skeleton Coast N.P.