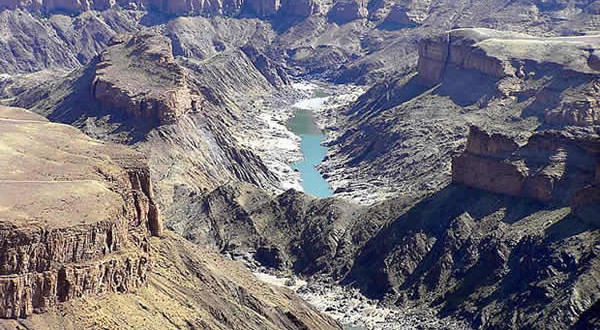 Located in southern Namibia, the Fish River Canyon National Park is one of (many) places that make a trip to Namibia particularly fascinating and interesting. The canyon can be reached from Keetmanshoop along a beautiful dirt road during the dry season, which can sometimes be impractical during the rainy season (from November to May). From the entrance gate of the Hobas restcamp an unpaved road of about 10 km leads to some scenic spots located on the edge of the canyon. The main lookout is equipped with toilets, picnic tables and grills for cooking meat.

The river that forms the canyon, the Fish River is 650 km long and is the longest inland river in Namibia. It originates in the mountains of eastern Naukluft and flows south of Ai-Ais into the Orange River. The canyon, due in part to water erosion, probably developed 500 million years ago during an era when this part of Africa received much more rain than today.

A SHOW OF AFRICAN NATURE

The erosion of that period together with the tectonic movements of the earth’s crust that caused the sinking of the valley where the river flowed, caused the formation of this canyon which is the largest in Africa and one of the largest in the world. The Fish River Canyon, is 161 km long, has a maximum width of 27 km and reaches a depth of 549 meters.

Most visitors admire the canyon from some scenic spots located near the main lookout. The observation of the vegetation that grows along the crest of the canyon walls is also very interesting.

There are specimens of both the poisonous Euphorbia, and of Aloe dichotoma or Quiver Tree (Kokerboom), which is the national tree of Namibia. In addition, several species of succulent plants can be observed, all perfectly adapted to the semi-desert environment. 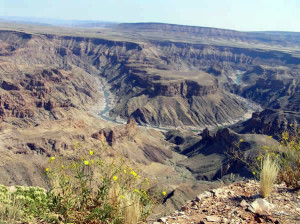 The best time to observe the canyon is mid-day when the sun manages to illuminate all the walls of the gorge. I recommend visiting the canyon even in the hours before sunset, but remember that the park closes at sunset and you will have to be out before closing.

A PLACE TO SEE FOR THOSE WHO VISIT NAMIBIA

Fish River Canyon has become a popular destination for trekking enthusiasts in recent years. There is a 5 days – 86 km route that runs through most of the canyon. In order to do this, however, you must be in the dry season (between May and September), be in good physical shape and have previously obtained a permit from Namibia Wildlife Resorts in Windhoek.

If you want you can also do the descent to the bottom of the canyon which lasts about 2.5 hours a / r. But even in this case you must have obtained prior authorization.

The canyon is inhabited by small mammals such as the Klipspringer Antelope and Dassies. There are also Steenbok, Springbok, mountain zebras (Hartman Zebra), baboons, kudu and leopards. Over 60 bird species live in the canyon area. Among these are herons, eagles and ostriches. Reptiles and insects are among the most common species. Lizards and geckos are abundant. While among the poisonous snakes there are the Cape Cobra (Naja nivea), the Black Spitting Cobra (Naja woodi), the Puff adder (Bitis arietans) and the Horned adder (Bitis caudalis). 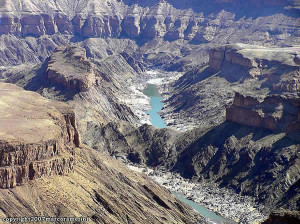 2013-12-13
admin
Previous: The climate of Namibia: when to go to Namibia
Next: Namib Rand: a private nature reserve