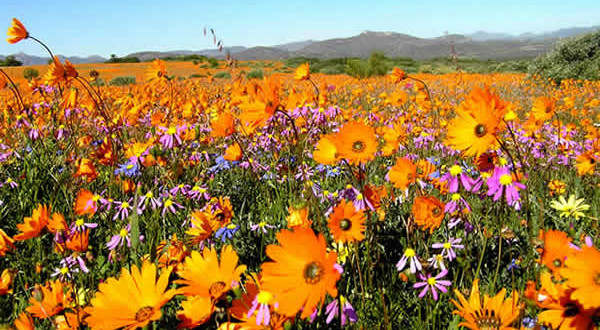 Located in the Northern Cape region of South Africa, about 500 km from Cape Town, between the Orange River and the wild coast of the Atlantic Ocean and near the towns of Springbok and Kamieskroon, the Namaqualand area is arid and dry for much of the year. But at times during the short spring, between August and September, a few drops of rain incredibly transform the arid landscape with vast expanses of wild flowers of every colour… undoubtedly the blooming desert of South Africa is one of the most impressive and evocative natural spectacles in the world.

Namaqualand is an arid area, but it is rich in bulbiferous flora. On the planet there are about 3,500 species of bulbiferous plants, over 1,000 of which are found only here. Always facing the sun, the flowers are open from about 10 a.m. to 4 p.m on sunny days. On cloudy days they remain closed.

Skilpad Wild Flower Reserve is one of the best places for admiring these flowering plants in South Africa. It lies about 25 km from Kamieskroon. The reserve is part of the Namaqualand National Park, consisting of about 60,000 hectares, with a topography characterised by round granite outcrops separated by alluvial sand. Much of the territory is made up of typical South African veld and the hills and mountains of the Kamiesberg Range, where peaks reach 1,700 metres, with Rooiberg the highest. 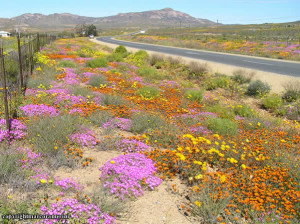 The park has a wide variety of succulents (Crassula spp., Adromischus spp., Pelargonium spp., Stapeliands and Cotyledon spp.), as well as annuals. The park is open from 8.00 am to 17.00 pm. During the short spring, enormous expanses of Namaqualand daisies colour the soil bright orange and yellow. To fully appreciate these magnificent blooms, there is a circular path with viewpoints, and several short hiking and nature trails.

Roughly 15 kilometres from Springbok is the Goegap Nature Reserve, a wild flower reserve of about 15,000 hectares. Here, about 600 varieties of flowers can be seen, as well as 45 species of mammals, including springbok, gemsbok and mountain zebra (Hartmann zebra), 94 species of birds, as well as reptiles and amphibians. Within the reserve, visitors can also enjoy the Hester Malan Wild Flower Garden… full of extraordinary succulents from the Namaqualand region, and a rock garden.

In the most arid area of Namaqualand, along the border with Namibia, lies the Richtersveld National Park, a wilderness park of about 160,000 hectares. In 2007, this Park was added to a list of World Heritage sites by UNESCO and it represents the unique mountain desert park of South Africa. There is an abundance of succulents and it hosts about 30% of all species in South Africa. 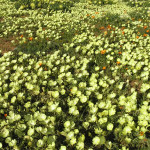 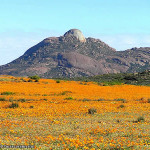 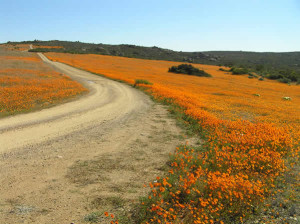 THE CLIMATE OF NAMAQUALAND

The Namaqualand is an arid and dry region of north-west of South Africa, this region is part of the area of ​​South Africa that is characterized by winter rains (ie, as the seasons reversed, European summer), the rainy season falls between June and August. The average annual rainfall is less than 200 mm.

WHEN TO GO IN NAMAQUALAND

The best time to visit the region to enjoy the beautiful blooms that sometimes characterize it are the months between August and September, when sometimes the short rains transformed the arid landscape into beautiful carpets of wild flowers of every shape and color.

THE CLIMATE OF NAMAQUALAND: CLIMATE TABLES 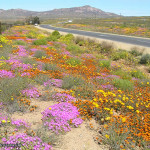 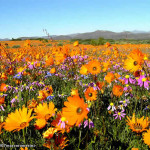 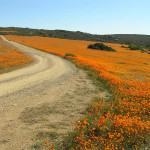 2013-12-14
admin
Previous: The animals of the Kalahari: suricate and mongooses
Next: Port Elizabeth: the water sports capital of South Africa