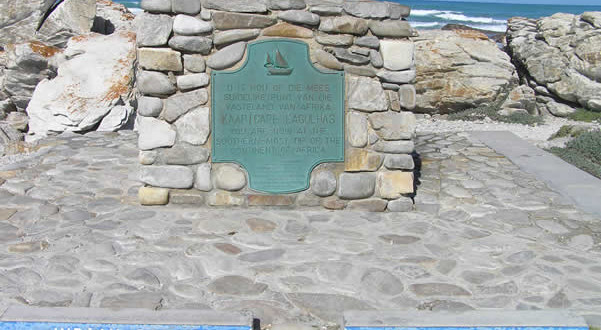 At the landscape level, however, Cape Agulhas is a low and inconspicuous rocky area, nothing to do with the cliffs of Cape Point and the Cape of Good Hope.

THE CAPE OF THE “NEEDLES”

It was the Portuguese navigators who first doubled the Cape, to name him Cabo das Agulhas. The name of the Cape derives from the Portuguese word “needles”, and it seems that it refers to the needles of the compasses, which in Agulhas pointed exactly towards the geographic north. Or according to other sources, the term “needles” could refer to the numerous rocks, similar to needles, which constitute a danger to navigation.

The area around the Cape is part of Agulhas National Park, the southernmost and also the most recent of South Africa’s national parks. The park covers an area of 16,804 hectares and includes an area rich in natural and cultural attractions. Its biodiversity is very important, in fact there are about 2,000 species of plants, of which 100 are endemic.

The Cape Agulhas area is in fact among the areas that are part of the Cape floral kingdom (South African kingdom) which is the smallest and richest of the six plant kingdoms in the world (Boreal, Neotropical, Paleotropical, South African, Australian, and Antarctic). Most of the species bloom between May and September. The area is also a place of migration for waterfowl and is very rich in marine life thanks to the intersection of hot and cold ocean currents. 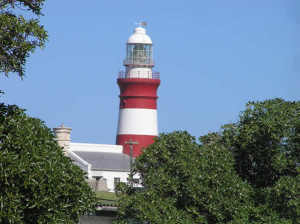 In addition to the ecological aspect, the cultural aspect is also noteworthy. In fact, evidence of archaeological deposits from the Khoisan migration period has been found in the area. Including remains of ancient Khoisan fish traps found east of the lighthouse.

COAST OF THE WRECKS: THE CEMETERY OF THE SHIPS

Finally, near the cape, there is the historic Cape Agulhas lighthouse which has been operating since 1849. This is the second oldest lighthouse in southern Africa. Inside there is a museum, the Cape Agulhas Lighthouse Museum, where the history of the development of lighthouses in South Africa is told.

The coast of Cape Agulhas is also called the ship cemetery due to the numerous shipwrecks that occurred in past centuries. An interesting shipwreck museum (Bredasdorp Shipwreck Museum) is located in Bredasdorp. Since the 16th century, over 125 shipwrecks have occurred along this stretch of coast (which measures about 100 km in length). Paths cross the park area, one of which leads to the wreck of the Meisho Maru, a ship wrecked in 1982, 4 km west of the lighthouse.

The place does not have the charm of the Cape Point cliffs and the Cape of Good Hope, but however, being in the area, it deserves a quick visit, it is still the southernmost point of Africa!

USEFUL INFORMATION: Cape Agulhas is located about 230 km from Cape Town, from which it can be reached by the N2 road, turning to Caledon and passing through Bredasdorp. Coming from the east, leave the N2 road near Swellendam and cross Bredasdorp to get to Cape Agulhas. The towns closest to the cape are L’Agulhas and the fishing village of Struisbaai. 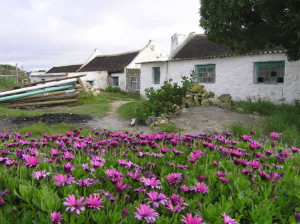 Arniston is a small town located on the Indian Ocean coast about 190 km from Cape Town and about 100 km from Hermanus. The village is located a short distance from Cape Agulhas, the southernmost point of Africa, and the beautiful white dunes of the De Hoop Nature Reserve.

The village is made up of two distinct inhabited centers: Arniston, a center characterized by modern villas and the ancient Kassiesbaai which is a fishing village. The latter is very characteristic with beautiful white houses some dating back to about 200 years ago, and has been declared a national monument.

In the Waenhuiskrans Nature Reserve near Arniston it is interesting to visit the huge sea cave called Waenhuiskrans and the beautiful white dunes that characterize the area around the town. The visit to the cave is to be done during low tide, because during high tide the cave fills with water.

In Arniston we eat excellent fish caught in the day by local fishermen. Characteristic is the departure of the fishermen, who at dawn, helped by a tractor, put their fishing boats into the sea. Another interesting aspect is the observation of whales which are easily observable from the coast between June and October. 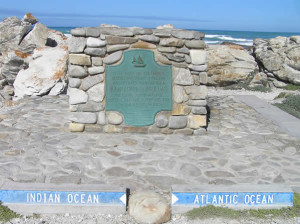 2013-12-14
admin
Previous: The climate of South Africa: when to go to South Africa
Next: Augrabies Falls and the Orange River Gorge