Home / Africa / Mauritius / The climate of Mauritius: when to go to Mauritius

The climate of Mauritius is tropical warm, tempered by the trade winds from the southeast. The direction from which the trade winds greatly influence the amounts of rain falling on the island, the eastern part of the island is considerably more rainy than the western one.

As in most tropical areas also in Mauritius there are two seasons based on the amount of rainfall, a warm and humid season from November to April and a cool and dry season from May to October.

The amount of rainfall varies greatly between the areas of the island, in fact, the average annual rainfall is around 1,400 mm along the east coast, but  along the west coast the average is only 600 mm and in the interior highlands reaches 4,000 mm.

The sea water temperatures in Mauritius island varies between 24°C and 28° C.

WHEN TO GO TO MAURITIUS

The seasonal differences are minimal, this makes Mauritius a perfect destination all year round,  are to be avoided, possibly the wettest months from January to March.

THE CLIMATE OF MAURITIUS: CLIMATE TABLES 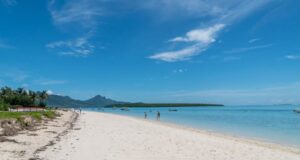