Augrabies Falls National Park is located 120 km west of the city of Upington in the Northern Cape region of South Africa. The park, which was established in 1966, occupies an area of 55,383 hectares along the course of the Orange River. At this point the Orange forms wild waterfalls almost 60 meters high and a gorge, the Orange River Gorge carved into the granite rock, 18 km long and 240 meters deep. The falls are particularly impressive during the floods of the river (usually in February-April), the name of the Augrabies falls in fact from the word ‘Aukoerebis’ which in the Khoi language (the language of the Hottentots) means “place of great noise”.

The area of the Augrabies Falls park is very arid and has a landscape made of rocks with evocative names such as Moon Rock, Ararat and Echo Corner. A dirt road leads to several vantage points along the Orange River gorge and the magnificent surrounding landscape. In the park there are numerous plant species (Kokerboom – quiver trees, Aloe dichotoma) and various species of succulents typical of this part of South Africa and animals (klipspringer, springbok, gemsbok, steenbok, kudu, eland, dassies, mongoose, giraffe, leopard, caracal, African wild cat, raptors and other birds, lizards, snakes).

Augrabies Falls National Park is home to nearly 50 species of reptiles, the most famous of which is the Broadley lizard (Platysaurus broadleyi), known locally as the Augrabies Flat Lizard. This species of lizard is found only in the Augrabies area, within a radius of 100 km from the waterfalls, and is easily visible at every viewpoint on the Orange River gorge and on the waterfalls.

Among the snakes the most dangerous is undoubtedly the black spitting cobra (Naja nigricincta), other species of snakes that can be found in the park of Augrabies are: the Cape cobra (Naja nivea), the Horned adder (Bitis cornuta), the Desert mountain adder (Bitis xeropaga), and many others. Despite the presence of many species of poisonous snakes, it is very difficult to see them, and bites on people caused by snakes have never been documented inside the park. 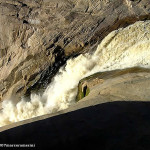 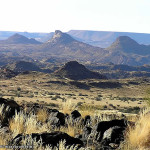 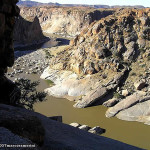 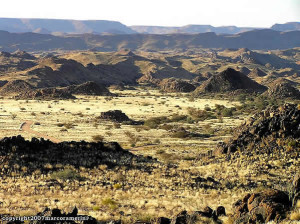 THE CLIMATE OF THE AUGRABIES FALLS

The Augrabies Falls National Park is located in a semi-arid region. The climate of the region is an arid and desert climate, with low annual rainfall and extreme variations in temperatures.

The rains are very scarce, on average just over 100 mm of rain fall per year. The rain season runs from November to April. But in a year there are only 37 rainy days. Sometimes, after the scarce winter rains, the arid soil turns into a paradise of colorful flowers. The intermediate seasons, autumn and spring, are characterized by moderate and pleasant temperatures.

WHEN TO GO TO AUGRABIES FALLS

The best time to visit the park and waterfalls is between March and October.

THE CLIMATE OF THE AUGRABIES WATERFALLS: CLIMATE TABLE 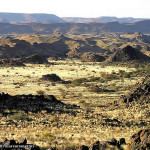 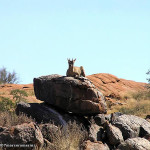 2013-12-14
admin
Previous: Cape Agulhas: the southernmost point of the Africa
Next: Bloemfontein: the judicial capital of South Africa