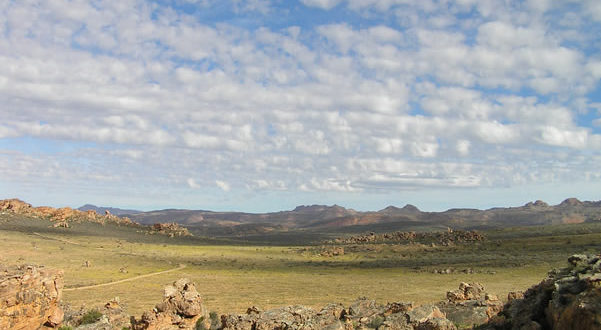 The mountains and the Cederberg nature reserve are located near Clanwilliam, about 300/250 kilometers north of Cape Town. This mountain range extends in the southern part of South Africa from north to south for about 50 km. The name of Cederberg derives from the cedar of Clanwilliam, whose scientific name is Widdringtonia Cedarbergensis, which is an endemic tree in the area. These mountains are known for their beautiful rock formations and the rock carvings of the San (Bushmen).

ROCKY ENGRAVINGS OF THE BUSHMEN (SAN) AND BIZZARRE ROCKY FORMATIONS

The Cederberg mountains border westwards with the Sandveld. While to the north are the Pakhuis mountains. To the east are the plains of Springbok. Finally to the south are the mountains of the Kouebokkeveld and the Skurweberge. The area was declared a Wilderness Area in 1973 and includes approximately 71,000 hectares of wild mountainous terrain. The area is renowned for its spectacular landscape and bizarre rock formations. In recent decades, the Cederberg has become a sought after destination for eco-tourism and trekking.

The highest mountains in the chain rise around 2,000 meters. The summit of the Sneeuberg, the highest peak, reaches 2,026 meters. Another important peak is the Tafelberg which reaches 1,969 meters in height. Often during the winter the highest peaks of the chain are covered with snow. The winters in the Cederberg are cold and wet while the summers are hot and dry. Most of the rain falls between May and September.

The Cederberg is a hiker’s paradise. There are many trekking paths to be traveled in this wild area. Among the best known natural attractions are the Maltese Cross, the Wolfberg Arch and the Wolfberg Cracks. The rock carvings of the San (Bushmen) are also very interesting and are found in various locations in the area. These paintings are between 300 and 6,000 years old.

2020-01-20
admin
Previous: The province of Northern Cape, South Africa
Next: Travel to South Africa: an itinerary in spectacular nature