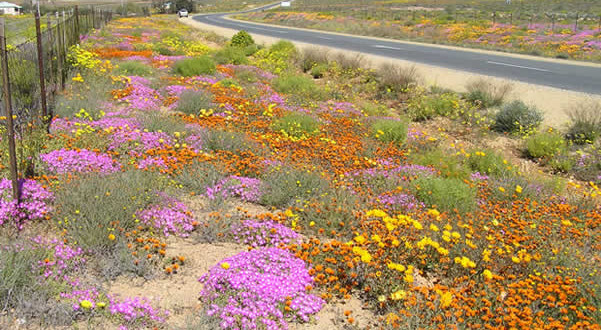 Deserts are inhospitable areas of the earth characterized by great aridity. In these regions there is very little rainfall and life forms, both animal and vegetable, have to face some of the most hostile conditions on the planet. In deserts, the lack of vegetation exposes the unprotected surface of the land to denudation processes. But when it rains they turn into spectacular flowering desert.

Deserts are found on every continent. About a third of the Earth’s surface is characterized by an arid or semi-arid climate. Deserts are generally found across the tropics. But they also include most of the polar regions, such as the Arctic and Antarctica, where there is generally little rainfall. In the case of the polar regions, these areas are called “polar deserts” or “cold deserts”.

According to the current classification, the areas of the Earth where rainfall is less than 250 mm annually are defined as deserts. On the other hand, the regions that receive between 250 and 500 mm of rainfall per year are defined as semi-desert. In this case, if the ground is covered with grass it is called steppe.

THE SHOW OF THE FLOWERED DESERTS

Even in the driest deserts, however, it can sometimes rain. And when this happens, truly spectacular phenomena can occur. Spectacular blooms can occur in some desert areas of the Earth when there are relatively heavy rains. Flowering occurs when the unusual level of rainfall reaches the seeds and bulbs that have been latent or dormant for years and germinates and blooms in the following days.

In the Atacama Desert in Chile, which usually receives between 10 mm and 50 mm of rain annually, the flowering of a large variety of flowers can occur in the months between September and November in the years when rainfall is unusually high. The area affected by this phenomenon is that located in the southern part of the Atacama Desert between the Chilean towns of Vallenar and Copiapò. The Llanos de Challe national park is one of the best places to contemplate the natural phenomenon of the “desierto florido” (flowering desert).

The blooms that occur in Anza-Borrego Desert State Park, located not far from San Diego in California, are famous in North America. Here if during the winter there are abundant rains followed by rains in early spring that periodically wet the ground so that it never dries up completely, you can have truly spectacular blooms. The best months are usually those between early March and mid-April. Other desert areas in the United States and Mexico can also experience episodes of spectacular blooms. These include the Sonora desert, between Mexico and the United States, where the flowers are mixed with the spectacular saguaro cactus. Flowering can sometimes also occur in the deserts of Arizona and Utah.

Another desert continent that enjoys beautiful blooms is Australia. In the desert areas of Western Australia, blooms can be observed in various areas, for example in the area of the Karijini national park and in the Kennedy Range, in the Carnarvon hinterland. The best time to observe blooms in Australian deserts is usually from late July to mid November. The desert areas of South Australia also sometimes have intense blooms.

Blooms also occur in Asia in the Judean desert in Israel and in the Gobi desert on the border between China and Mongolia.

In South Africa the barren and desert terrain south of the Namibian border, Namaqualand, features some of the most spectacular flowering desert landscapes on the planet. The most spectacular blooms depend on the rains, but usually they reach their peak in August. The most famous area for blooms is the Namaqua national park. But the whole area around the town of Springbok is the scene of spectacular blooms. The West Coast National Park, just north-west of Cape Town, and the wild Cederberg area around the town of Clanwilliam also have intense blooms.

2019-12-31
admin
Previous: The most spectacular waterfalls in the world
Next: Travel in Yunnan: landscapes and ethnic groups

The climate of Yucatan: when to go to Yucatan

Melbourne: the cultural capital of Australia

Guide to Australia Hotels and Bed and Breakfasts

The town of Castro is the capital of the Chilean province of ...