The Namib-Naukluft National Park, whose original core was founded in 1907 by the German colonial administration and subsequently enlarged, is today among the largest protected natural areas on the African continent (49,768 sq km). The landscapes that can be admired are truly breathtaking and represent the quintessence of the Namib Desert. The region is characterized by high and isolated rock formations called “inselbergs” or “kopjes” (the latter is an Afrikaans word that indicates “isolated desert mountains”) formed by red granite rocks. While the easternmost part of the park is formed by the Naukluft mountains.

MAYBE THE OLDEST DESERT ON EARTH

The Namib desert, which occupies most of the park’s territory, is probably the oldest desert on earth having an age of approximately 80 million years. This immense sea of dunes extends from north to south along the coast of the Atlantic ocean for over 1,600 km and from west to east for a depth in the interior that varies between 50 and 160 km.

The word “Namib”, in Nama language means “open space”. Winds are mainly responsible for shaping the Namib dunes, whose color indicates their age. In fact, the iron contained in the sand oxidizes over time, creating the characteristic red-orange color of the Namib dunes. 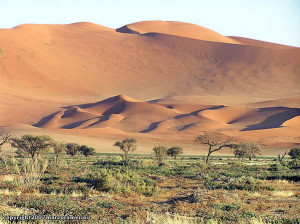 The dunes of the Namib desert are the highest in the world, exceeding 300 meters above the surrounding desert plain. A surprisingly high amount of life forms has adapted to living in this extremely arid territory. Among these are hyenas, jackals, oryxes, snakes, beetles, and other types of insects. While many varieties of birds are found in the vicinity of the rare temporary bodies of water (as happens in Sossusvlei).

The very rare rains (10 mm per year) sometimes give a little relief to the completely arid soil for the rest of the year. Although the mists that form in the nearby Atlantic ocean regularly bring a certain amount of humidity. 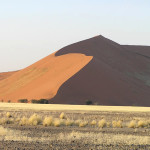 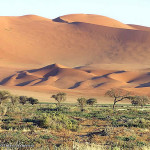 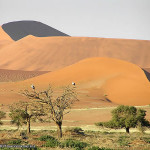