Home / Europe / Spain / The climate of Spain: when to go to Spain

The climate of Spain: when to go to Spain

Besides these three main climates, Spain has a climate of Alpine character on the highest peaks of the Pyrenees, while the climate in the Murcia region is a semi-arid climate, the Canary Islands enjoy a mild sub​​-tropical and semi-arid climate.

THE CLIMATE OF SPAIN: OCEANIC CLIMATE

The oceanic climate is characteristic of northern Spain, often called “Green Spain”, the area affected by this kind of weather lies to the west of the Pyrenees up to the coast of Galicia. The climate of this area is characterized by relatively mild winters and hot but not muggy summers, the rains are abundant and distributed throughout the year.

The north and the north-west of the country, particularly along the Atlantic coast benefits from the influence of the Gulf Stream and through this has a mild climate and high humidity. In fact, the depressions coming from the ocean causing frequent rain, dense fog along the coast and often cloudy days, autumn is the wettest season, while the summer it is usually sunny but temperatures are cooler than in the rest of Spain. Temperatures vary little between between day and night and also on a seasonal basis. The distance from the ocean reduces the intensity of rainfall that gradually decreases moving towards the east.

THE CLIMATE OF GALICIA

The rainiest seasons are winter, autumn and spring, the rain decreases moving from north-west to south-east with a decrease in the annual rainy days from 150 to 110.

The best time to visit the region are the warmest and sunniest months between June and August.

THE CLIMATE OF SPAIN: CONTINENTAL CLIMATE

This type of climate affects most of the Iberian Peninsula, influencing the Meseta Central and the basin of the river Ebro. 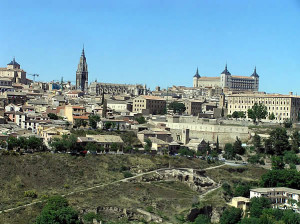 The climate of these areas is characterized by important differences in both temperature between day and night and between the different seasons, and erratic and poor rainfall, with annual averages between 300 mm and 600 mm.

The Spanish Meseta and Central Highlands are located in a continental climate, which causes a type of climate with strong seasonal variations in temperature, the summers are hot and winters very cold. Also spring and autumn can be rainy. In the mountains during winter snows in abundance. Summer temperatures undergo major variations between day and night going from 30-40°C of the day to 10°C of the night.

THE CLIMATE OF THE CASTILE

Castile has a continental climate, with cool winters, with temperatures below 8 ° C, and with night frosts and occasional snowfalls. Summers are very hot with average temperatures exceeding 24 ° C in July and August, with highs often reaching 35 ° C. The rains are rather scarce the relatively rainiest months are those between October and December.

THE CLIMATE OF SPAIN: MEDITERRANEAN CLIMATE

The area of Spain with Mediterranean climate extends along the coast south of the Pyrenees to Andalusia. The Mediterranean area enjoys mild winters, long dry summers, rainy autumns and wonderful springs, usually a breeze from the sea mitigates the summer heat, while the extreme southern regions are interested in summer by warm winds coming from northern Africa. Average winter temperatures along the coast are around 10-13°C, while in the inner regions of Andalusia are a few degrees lower. In summer, average temperatures are around 22-27°C along the coast and 29-31°C in inland areas.

THE CLIMATE OF THE CATALONIA

Catalonia enjoys a temperate climate for most of the year. The region has mild winters and hot, muggy summers. The maximum summer temperatures sometimes exceed 35 ° C while the average summer temperatures have values of 29 ° C. The rains are more frequent between September and November, January is the coldest month of the year although the winters are generally mild.

THE CLIMATE OF VALENCIA

The Valencia area has a Mediterranean climate, with mild winters, while the rainiest period is autumn. Average annual rainfall is in the order of 450 mm and is concentrated between September and December. Spring and summer are the best seasons for a visit to the city.

This area of the country, which also extends in part of Andalusia, has a semi-arid climate with very hot summers and cold winters. The rains are very scarce and reach the minimum in the area around the Cabo de Gata with an average annual rainfall of 150 mm, it is one of the driest places in Europe.

The climate of the Balearic Islands.

Climate of the Canary Islands.

BEST PERIOD TO GO TO SPAIN

Spring and autumn are certainly the best times to travel to Spain. Spring is the ideal season to visit the central regions of Castile, Andalusia, the Mediterranean coast and the Balearic islands. Summer is the best time to visit the northern regions, especially the Cantabrian coast, Galicia and the Santiago route. Autumn is probably the best time of the year to visit the whole country. The climate is excellent, with sunny days and blue skies. During the winter the mountain ranges of both north and south offer excellent opportunities for winter sports.

Official site of the Weather of Spain.

2013-12-30
admin
Previous: Tourist attractions of Spain: what to see in Spain
Next: Sweden: nature and Scandinavian efficiency

Tenerife, the main tourist destination of the Canary Islands, enjoys a particularly ...