Home / Europe / Italy / The climate of Italy: when to go to Italy

Italy is a peninsula surrounded by the seas, and thanks to the influence of the sea, most of the Italian territory enjoys a Mediterranean climate. The Alpine chain acts as a wall that blocks part of the cold influences from northern Europe. But despite this the geographical conformation of Italy means that the climate of Italy is formed by various microclimates, often originating from the distance from the sea and from the altitude.

What makes the climate of Italy so different is the shape of the Italian peninsula – which includes almost every type of landscape – combined with the shape of the long, narrow and stretched Italian territory between Europe and Africa, and surrounded by the sea on three sides. In the Alpine region the climate is temperate cold as that typical of northern Europe. The Alpine chain has a mountain climate, very cold in winter and with frequent snowfall, while summers are cool but often rainy. In the highest mountains of the Alps at altitudes above 3,000 meters the climate becomes similar to that of the tundra. 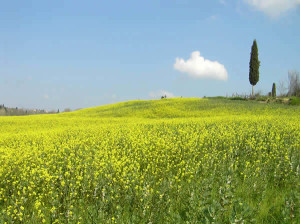 WHEN TO GO TO ITALY

Due to the climatic differences between the various areas of the country, each month of the year can have a good Italian destination to visit. For those visiting the sea areas, the months between June and September are the best. While those who want to dedicate themselves to alpine sports in the Alps and in the Apennines will find the months between December and March excellent.

The months between March and June are excellent for visiting the major art cities of the country, but also the months of September and October. In general, the period from March to October is the one with the best weather and milder temperatures on the whole peninsula. In the extreme southern regions even winter can be pleasant.

However, the best time to visit Italy is between April and June, when the climate and temperatures are mild all over. In this period the countryside in bloom adds fantastic sceneries, so that it is possible to visit the cities and enjoy the mild climate at the same time.

The climate of Northern Italy

The climate of Southern Italy