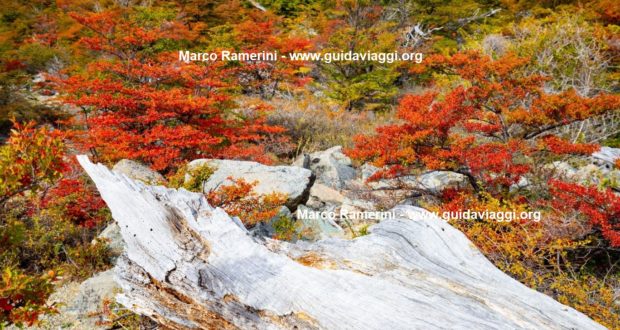 Autumn is among the most beautiful seasons from a photographic point of view. In this period, nature creates indescribable colors thanks to the presence of deciduous trees. The leaves of these trees begin to change color and then fall. This usually occurs during the months between September and October in the northern hemisphere and between April and May in the southern hemisphere. For this trip I chose the colors of autumn in Patagonia.

Among the most famous destinations in the world for the colors of the leaves in autumn are southern Canada (Quebec), some areas of the northern United States (Appalachian mountain range), Argentina, Chile. In Europe we find Scandinavia, good part of the wooded areas of Northern Europe and Western Europe, the Alps and the Apennines in Italy. The Caucasus region between Russia and Georgia. Eastern Asia, including most of northern and eastern China, Korea, Japan and finally the South Island of New Zealand.

PATAGONIA IN THE AUTUMN

Argentine and Chilean Patagonia is one of the most interesting areas to admire this natural phenomenon. The place we have chosen is rich in natural beauty also in other periods of the year but its beauty reaches its peak during the southern autumn. In particular, the most suitable month is April when the leaves take on truly spectacular colors. In this season, tourists visiting this area of the world are few in relation to the busiest summer months (i.e. those that go from December to February). Autumn is also a good time because it is much less windy than the summer months, which have milder temperatures but also a strong wind that blows incessantly for long periods.

To observe the natural phenomenon of “foliage” we have chosen some of the most spectacular areas of Chile and Argentina: the Torres del Paine National Park in Chile and the Los Glaciares National Park in Argentina. Our photographic trip took place between early April and mid April.

The autumn colors were very beautiful in every area we visited, but reached their peak when we visited the Los Glaciares National Park in Argentina and in particular the El Chalten area on the slopes of Monte Fitz Roy and Cerro Torre. Here the spectacle of Monte Fitz Roy admired by Laguna Capri in the morning and the colors of the leaves of the trees all around, alone were worth the trip. Not far away, the woods around the Chorrillo del Salto also had spectacular colors.

In Chile the wooded areas around the Torres del Paine were also beginning to color but were slightly behind the woods in the Argentine part.

PHOTOS OF PATAGONIA IN AUTUMN

2020-04-03
admin
Previous: Valdes Peninsula, the paradise of marine mammals
Next: Photographic trip to Patagonia in autumn