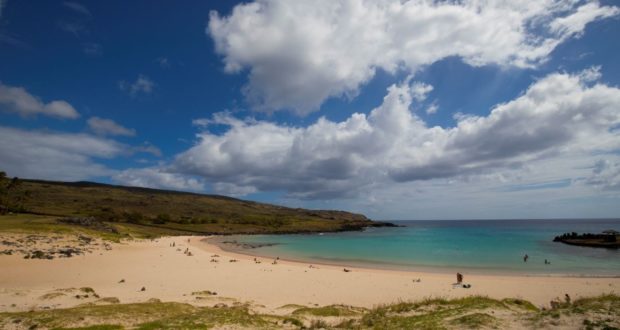 Easter Island is famous for its mysterious civilization, the one that built the huge volcanic stone statues called “moai”. The island is located in the so-called southern seas, in the waters of the southern Pacific ocean and is part of the islands of Polynesia. Its original inhabitants are also Polynesian and speak a language similar to Tahitian. The island, however, has an aspect that absolutely does not remember the spectacular islands of Polynesia rich in tropical vegetation, shining lagoons and postcard sea.

Easter Island has in fact a barren landscape and poor vegetation. Its coasts are rocky and wild, formed by a succession of black volcanic rock where the powerful waves of the Pacific ocean crash. Often, the waves crash on cliffs that reach even hundreds of meters in height as occurs at the two volcanoes Rano Kau and Poike. Along the coasts of the island, however, there is an exception: Anakena beach.

Located almost in the middle of the northern coast less than 20 km away from the only inhabited center of the island, Hanga Roa, Anakena beach is the closest thing to the beach canons of the South Seas. The bay of Anakena is a splendid crescent-shaped bay formed by soft white coral sand and bathed by a sea with beautiful blue colors. The beach is surrounded by a coconut palm plantation, the only one on the island. This is a great place to relax for a few hours and take a dip in the warm, calm waters of the Pacific ocean. Next to the car park located at the end of the road (not the first one you meet, but the next one) there are some small restaurants where you can taste excellent empanadas and delicious fruit juices.

HERE THE FIRST INHABITANTS OF THE ISLAND LANDED

According to the oral tradition of the Rapa Nui people, the beach of Anakena is the place where the first inhabitants of the island landed: here in fact arrived the Polynesian expedition led by Hotu Matu’a, the first king of Rapa Nui. It seems that this happened between 700 and 1100 AD. Behind the beach, in a very scenic position are the seven statues of the Ahu Nau-Nau. Four statues are surmounted by the characteristic red rock hat coming from the Puna Pau quarry, a statue is deprived of it, while the other two are also missing from the head.

Another platform for moais is closer to the sea, here is a unique moai: the ancient statue of Ahu Ature Huke. This moai was the first of the island to be restored and relocated to its original location by the Norwegian explorer Thor Heyerdahl in 1956. 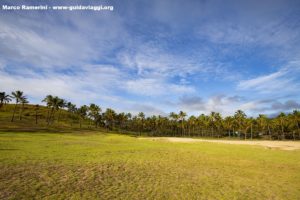 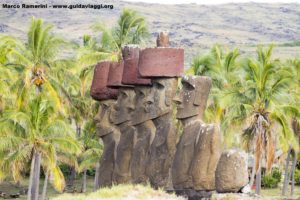 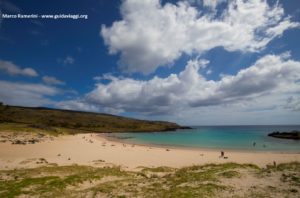 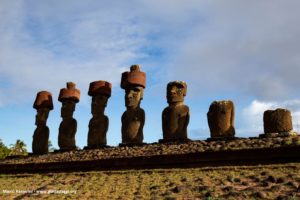 2018-05-22
admin
Previous: History of Easter Island: many questions, few certainties
Next: Lebanon: a small country rich in history and archeology