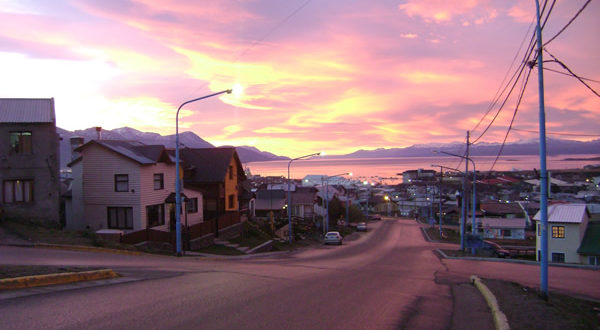 Ushuaia is the main center of Tierra del Fuego and is generally known as the southernmost city in the world. The city was recently founded, it was in fact founded in 1870 by some British missionaries, later it developed as a penal colony. Ushuaia is located in Argentina on the southern section of the island of Tierra del Fuego. It overlooks a large bay along the Beagle Channel and is surrounded by the Martial Mountains to the north. In front of the inhabited center is the island of Navarino.

The city has an interesting museum that illustrates the history of the foundation of the city and indigenous peoples. These populations were the Yámana who inhabited the region before the arrival of the Europeans. Around the city there are numerous natural attractions, among the most beautiful there are the spectacular natural sceneries of the Tierra del Fuego National Park. This is a park full of mountains, lakes, waterfalls, glaciers and forests. The park can be reached both by car and by train, with the famous Tren del Fin del Mundo. The Ushuaia region is also known for the rich fauna that populates it, you can spot penguins, whales, killer whales, seals and numerous species of birds.

Getting up at sunrise in Ushuaia was something special. It doesn’t matter if it was cold, if I was very sleepy or tired. I took the camera and went, in many cases with the company of good friends, in search of those magical moments. There were also occasions where the camera was missing and the connection with the sky, nature and the environment were unique.

So often, the click of the camera immortalized the right moment to share with everyone forever. This is to make sure that you too have the motivation to live this gift of nature if you have the opportunity. This show often lasts no more than 10 minutes, but there is no doubt that the efforts to be able to admire these moments have been some of the most beautiful memories I have of Tierra del Fuego.

If you want to see the most hidden corners of Ushuaia and its surroundings, do not miss to visit www.trekkingenushuaia.blogspot.com.ar a project dedicated to the diffusion of non-traditional places on the island of Tierra del Fuego. So that somehow we all begin to appreciate how important contact with nature is every day. How important is the way we relate to the environment. An environment to take care of, love, enhance and always respect a little more.

2020-04-03
admin
Previous: Ushuaia: The summit of Cerro 5 Hermanos
Next: Argentine Patagonia: the petrified forest of Jaramillo