Home / South America / Argentina / The Puna: a plateau between Argentina and Chile 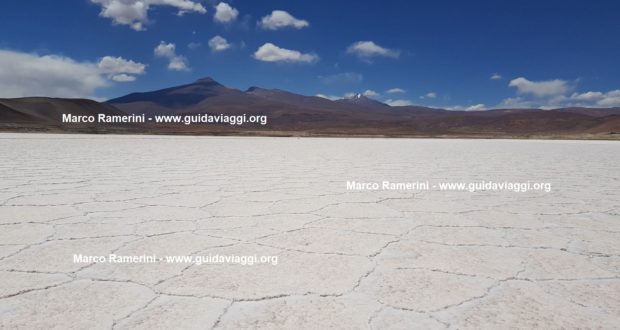 The Puna is a plateau that largely belongs to Argentina and to a lesser extent to Chile. This plateau which extends for 75,000 sq km is located at an average height of around 4,500 meters. From a geographical point of view, this region is the southward continuation of the Bolivian Plateau. In Argentina the Puna extends in three provinces of the country: those of Salta, Jujuy and Catamarca. In Chile, the Puna includes a small territory on the border with Argentina in the provinces of Atacama and Antofagasta.

Until the Pacific War (1879-1883) this region also known as Puna de Atacama belonged totally to Bolivia. In 1889 Bolivia ceded the entire territory to Argentina in exchange for some territorial awards around the town of Tarija. This transfer of territory opened up to a border dispute between Chile and Argentina. This dispute was resolved only in 1898 with an agreement. 85% of the Puna became territory of Argentina and the remaining 15% of Chile.

JOURNEY IN THE PUNA

The starting point for visiting the Puna Argentina is the city of Salta. This city is also excellent for spending a few days. There are in fact several valuable buildings from the Spanish colonial era. In addition to some interesting museums.

Starting from Salta, which is located just over 1,100 meters above sea level, to reach the Puna it is necessary to climb towards the Andes mountain range. To the north the gateway to the Puna is the town of San Antonio de los Cobres which is about 165 km from Salta. Here is also the famous “Tren a las Nubes”, one of the highest railway lines in the world. From here you can reach the inhabited center of Tolar Grande by crossing the Salar de Pocitos, the Salar de Pastos Grande, the Desierto del Labirinto and the Salar del Diablo.

South of Salta, however, the gateway to the Puna can be reached after about 400 kilometers. From Salta you continue along the famous Ruta 40 to the village of Las Juntas and from here you start to climb after taking Ruta 36 and then Ruta 43 which enters the actual Puna.

The landscape becomes more and more spectacular at bend in the road. Then about 40 kilometers from the small village of El Peñón there is a first natural place that alone is worth the trip, the so-called Pumice Stone Field (Campo de Piedra Pómez).

A whole day should be dedicated to the Galàn Volcano and the lagoons that surround it, including the Laguna Chica and the Laguna Grande. In some of these lagoons we can also admire flamingos. While inside the crater of the volcano there is the Laguna Diamante. The caldera of the Galàn volcano which measures 38 km by 26 km is one of the largest caldera in the world.

Along the road that connects Antofagasta de la Sierra and Tolar Grande you can admire the Quebrada del Diablo, Los Ojos de Colores, the Cono de Arita, and then the Salar di Arizaro. We cross a landscape that does not seem terrestrial: white expanses of salt, colorful lagoons, black volcanic cones, snow-capped mountains, rarefied air and even unexpected green oases like the one where Don Luis lives.

The remote village of Tolar Grande, inserted in a spectacular landscape made of scenic round hills, is the basis for visiting this area of the Puna. The whole surrounding area is an immense mining area. There are mines still active and others abandoned for decades. We in particular visit the abandoned mines of Mina la Casualidad and Mina Julia. At Mina Julia, on the border between Argentina and Chile, the highest altitude of the trip is reached: 5,225 meters above sea level.

One of the attractions of Tolar Grande, without a doubt, are the pools of Ojos de Mar. A group of pools of blue water located a few kilometers from the village. These pools contain stromatolites, very ancient microorganisms that survive only in a few places on our planet, such as in Shark Bay in Australia.

Thanks to Davide’s perfect organization and his great knowledge of the places and the key people, we are able to see the pools both day and night. We are accompanied by Porfidio, the guardian of the pools. The experience of the reflection of the Milky Way and the stars of the southern sky in the water of the pools is superb. The night skies here are unique. The high altitude and above all the lack of light pollution make the Puna sky one of the most beautiful in the world.

2020-04-30
admin
Previous: Travel in the mountains of Central Asia
Next: Bouvet: A Norwegian island between Africa and Antarctica