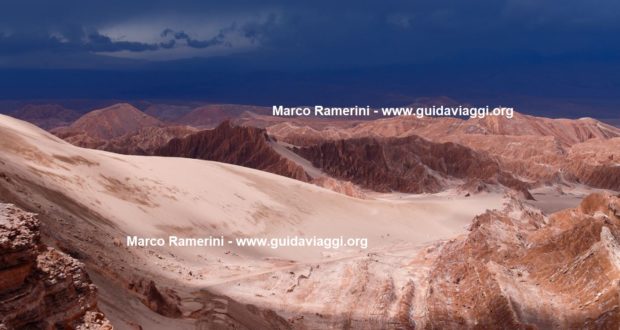 The Atacama desert is located in northern Chile, along a strip of land between the Andes mountain range and the Pacific ocean. This desert occupies an area of over 100,000 sq km and extends between the border with Peru and 30 ° south latitude.

It is a territory rich in saltpetre, formed by a desert of rocks and stones, dominated by the imposing volcanoes of the Andes, with an altitude varying between sea level and 4,000 meters. In the large plateau is the variety of natural landscapes, there are salt marshes, volcanoes, lakes and geysers.

This desert is considered the most arid and driest desert in the world. The driest part of the desert is located south of the Loa River between the Sierra Vicuña Mackenna and the Cordillera Domeyko. Here the rainfall is completely absent, the temperature variations between day and night very high.

The most important cities in the region are Antofagasta, Iquique and Arica, all located along the Pacific Ocean coast.

TOURIST ATTRACTIONS: WHAT TO VISIT IN THE ATACAMA DESERT

The extreme aridity of the desert allowed the conservation of the archaeological remains of the populations that inhabited it. There are petroglyphs, geoglyphs and pictograms. From this point of view the most interesting areas are those of the Azapa valley, the Lluta valley, the Atacama Giant, and the Pintados geoglyphs, protected in the Pampa del Tamarugal nature reserve (Reserva Nacional Pampa del Tamarugal).

The area around the town of San Pedro de Atacama is very beautiful with interesting remains of the Atacameña culture and spectacular desert landscapes dotted with lagoons, salt marshes, volcanoes and geysers.

Arica is a coastal city with beautiful beaches and is also a starting point for visiting the Putre area and the Lauca national parks (Parque Nacional Lauca) and the Isluga volcano (Parque Nacional Volcán Isluga). These parks protect a fantastic plateau full of lakes and volcanoes located in the far north of Chile where the ceremonial sites of the Aymara people are also located.

The climate of the Atacama Desert.