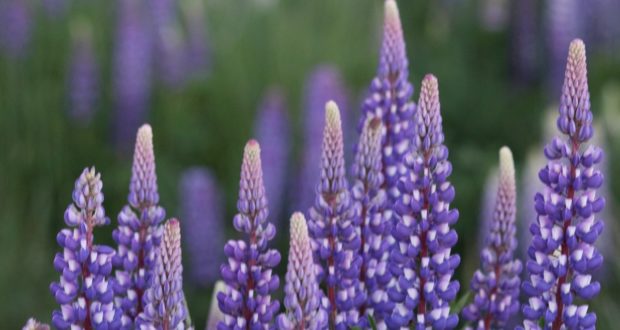 A very beautiful aspect both from the landscape and photographic point of view of a trip made in spring in New Zealand are the blooms. The most beautiful areas for observing the spring blooms are found on the splendid South Island. The best time to admire them is late spring. Generally the month of November and the beginning of December is the period in which wild lupins and broom are most likely to be found in full bloom. In addition to lupins and broom, there are also numerous other types of flowers during this period, such as rockrose, but the blooms of the first two species are truly spectacular. In New Zealand, Lupinus polyphyllus or wild Lupine, an invasive plant, grows in large numbers along the main roads and streams of the South Island.

During late spring blooms on South Island od New Zealand are at their peak. The wild lupine blooms around Lake Tekapo are a sight. The most beautiful point to admire the lupins is right on the lake around the Church of the Good Shepherd and on the other side of the pedestrian bridge that crosses the lake’s emissary. Here you will have the opportunity to take unrepeatable photographs with the colorful lupines. You will have the lupins, the lake and in the background the snow-capped mountains of the New Zealand Alps or the lupines and the church in the background.

Another area where we have found a high concentration of wild lupines in bloom is the Waitaki river valley. Precisely on the road between Omarama and Oamaru near Kurow Creek. Here, along the river, we found a truly spectacular expanse of lupines in bloom. Another point where we could not help but stop for the spectacular lupine bloom we found is along Te Anau – Milford Road. Coming from Te Anau the exact point is located just before arriving at Lake Gunn at Cascade Creek. Here too the New Zealand nature has welcomed us – in a spectacular landscape of mountains, streams and forests – with an exceptional lupine bloom with colors ranging from bright purple to white, passing through purple, red, pink, yellow.

Across the country you will find entire hills colored yellow. They are the flowering brooms. The plant is an invasive plant imported from Europe (Cytisus scoparius). This plant has adapted so well that it colonizes entire areas of the country. Brooms are present all over the South Island.

On the South Island, the gorse blooms are spectacular both in the Lake Tekapo area and along the initial stretch of Milford Road immediately after Te Anau Downs. But entire yellow-cloaked hills are visible on much of the island. As in the Catlins, along Lake Te Anau, along Lake Wakatipu, and also along the road that passes from Cardrona connects Queenstown to Wanaka and in many other places. Soon you will find that broom, which New Zealanders call Scotch broom or English broom, are literally everywhere!

A photographic tour to New Zealand.

Booking.com
2020-04-21
admin
Previous: The Nugget Point lighthouse: an icon of New Zealand
Next: The trail to Mount Cook: the Hooker Valley Track