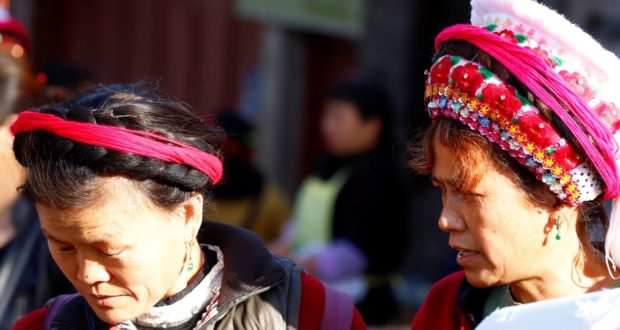 Women at the market in Zhoucheng, Yunnan, China. Author and Copyright Marco Ramerini

On this page other photos of my trip in Yunnan. Here I focus on the population. This peripheral province of China is known for high ethnic diversity. Indeed, Yunnan has the highest number of recognized ethnic groups among the provinces and autonomous regions in China. To be officially recognized by the Chinese government, an ethnic group must have a numerical consistency greater than 5,000 people. There are 25 recognized ethnic groups in Yunnan, but many others do not reach the minimum threshold.

According to the latest census, about 38% of Yunnan’s population is a member of ethnic minorities. Among the most numerous ethnic groups we find the Yi, Bai, Hani, Tai, Dai, Miao, Lisu, Hui, Lahu, Wa, Naxi (Nakhi), Yao, Moso. Most of these ethnic groups speak their own language, have their own traditional customs, and the style of construction of the houses also varies greatly.

A GREAT RICH OF CLOTHES AND HEADWEAR

Due to the presence of different ethnic groups, the customs, culture, language, construction styles and clothes of the Yunnan population vary widely. Usually just moving a few kilometers to find villages inhabited by populations of different ethnicities. Usually it is the clothes and in particular the headdresses used by women that make us understand the ethnicity to which the inhabitants of a particular village belong.

Village markets are the best places to observe and photograph people involved in their daily activities. The markets of Yunnan are very beautiful and allow you to admire the varied populations of this beautiful province of southern China in their traditional costumes. Here are some photos of the Yunnan population.

Travel to Yunnan: A province of China characterized by a wide variety of landscapes and ethnic groups.

2019-12-30
admin
Previous: Tourist attractions of Yunnan: what to see in Yunnan
Next: The most spectacular waterfalls in the world