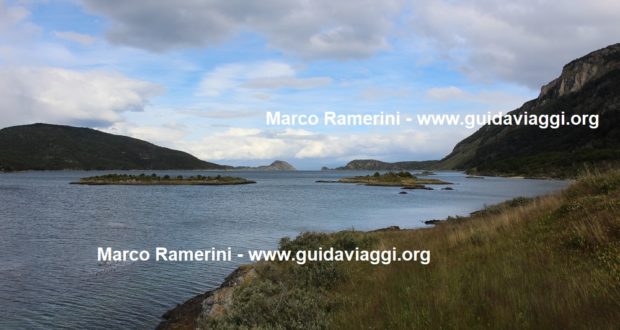 At the southern end of South America lies a vast wild island: the Isla Grande de Tierra del Fuego in Spanish, known more simply as Tierra del Fuego. This island covers almost 48,000 sq km and represents the southernmost offshoot of Argentina. This is not the southernmost point of South America because the Chilean territory extends much further south to Cape Horn. The island is separated from the American continent by the Strait of Magellan and is politically divided between Chile and Argentina. Over 60% of the Tierra del Fuego area belongs to Chile. While the remaining 40% belongs to Argentina. On the island there are mountains that reach 2,500 meters in height.

THE MOST SOUTHERN CITY IN THE WORLD: USHUAIA

On the bottom of a beautiful bay in front of the Beagle channel and surrounded by majestic snow-capped mountains is the Argentine town of Ushuaia. Ushuaia, which is considered to be the southernmost city in the world, is characterized by buildings with bizarre architecture. Located in the southern part of Tierra del Fuego between the Beagle channel and the last offshoots of the Andes mountains. Ushuaia is a concentrate of freezing climate, wind, dark sea, plain, mountains and snow.

A WILD TERRITORY MADE OF MOUNTAINS, FOREST LAKES AND GLACIERS

To the west of the city there is a spectacular national park: the Parque nacional Tierra del Fuego (Tierra del Fuego National Park), established in 1960. The park covers about 630 sq km and borders the recently established Chilean park of Yendegaia (Parque nacional Yendegaia) which in turn occupies over 1,100 sq km of the island. The two parks include stretches of pristine coastline along the Beagle Channel, Lake Roca, as well as part of Lake Fagnano and some mountain ranges in the interior.

The landscape of the park territory is the result of glacial erosion. The park is dotted with mountains, glacial lakes and rivers that form deep valleys. Here large sections of sub-Antarctic forest and a rich biological ecosystem are preserved. Only a small area of only 20 sq km at the southern end of the park is open to the public. The rest of the park is an “reserva estricta” integral reserve area. The plant landscape of the park is very suggestive. The stretch of coast on the Beagle channel where the forest vegetation reaches the sea is very beautiful.

The park entrance is located just 11 km west of Ushuaia. Along the road leading to Lake Roca there is a nice visitor center with an adjoining restaurant and a panoramic point on the Laguna Negra. In the park there is a beautiful network of paths that stretch for about 40 km.

After entering the park, the first crossroads (on the left) is the one that leads to Bahia Ensenada Zaratiegui. Here is the small post office where you can send your postcards from the End of the World (Correo del Fin del Mundo). But the most beautiful sight is that of the wild coast cloaked in spectacular vegetation that goes as far as lapping the sea.

There are some beautiful paths that you can take which will allow you to observe the magnificent local nature. In front of the bay stands the Redonda island and then the entrance of the Lapataia bay.

The next stop is Lake Roca, a glacial lake that stretches between Chile and Argentina. The lake, which is 11 km long and about 1.5 km wide, is surrounded by the mountain peaks of the southern end of the Andes. Along the road leading to the lake is the park’s Visitor Center (Centro de Visitantes Alakush). Here you will find a restaurant and a panoramic point on the Laguna Negra. In the Negra lagoon you can spot different species of birds and other local fauna.

Continuing until the end of the park road you reach the sea again at the Lapataia Bay which is located at the end of Ruta Nacional n ° 3. From the parking lot, raised paths lead to reach the Bay of Lapataia and the so-called panoramic point of the Fin del Mundo. Stop for a few minutes, observe the nature that surrounds you and think about where you are. According to the sign posted, Alaska is at 17,848 km!

The park can also be reached by the famous Fin del Mundo train. This is a steam train that runs through part of the park for about 5 km. The final station is located near the junction for Bahia Ensenada Zaratiegui.