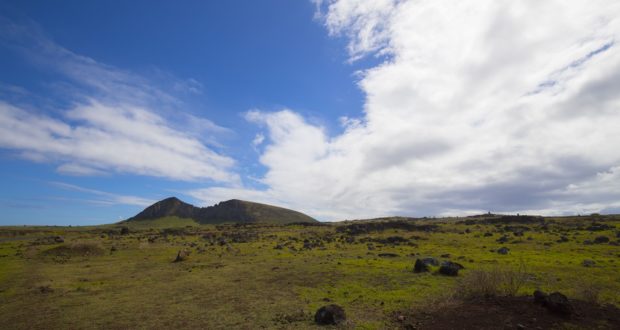 Among the most fascinating places on the island is the spectacular Rano Kau crater. Located at the southwestern end of the island, Rano Kau has a lake inside which is one of the only three natural freshwater lakes on the island. On one side of the volcano is the famous ceremonial center of Orongo.

On the slopes of the Rano Kau volcano, in the ceremonial center of Orongo, and along the arm of the sea that separates it from the islets of Motu Iti, Motu Nui and Motu Kao Kao, the bird man ceremony took place. Between the 18th and 19th centuries, Orongo became the center of the bird man cult, whose final ritual consisted of an annual competition to bring the first undamaged tern egg from the nearby islet of Motu Nui to Orongo.

The volcanic cone of Rano Kau is largely surrounded by ocean water, and has been eroded to form cliffs that reach heights of about 300 meters. The crater is about 1.5 kilometers wide and inside there is a freshwater lake. The surface of the lake is largely covered by floating islands of totora reeds.

Poike volcano is the easternmost volcano of the three volcanoes on Easter Island. The volcano, which reaches 370 meters in height, is the second highest point on the island after the Terevaka volcano. The Poike is located on the eastern end of the island, the one oriented towards South America which is more than 3,500 kilometers from there. Poike volcano is the oldest of the Easter Island volcanoes.

In 1770 the three hills of Poike volcano were evidence of the Spanish Empire’s taking over Easter Island. In fact, on that occasion the Spaniards commanded by González de Ahedo erected three wooden crosses on top of the three small hills of the Poike volcano as a testimony of taking possession of the island.

The Terevaka volcano (Ma’unga Terevaka) is the largest, the highest (507 meters) and the youngest of the three main extinct volcanoes that form Easter Island. Several small volcanoes and craters dot its slopes, including a crater that houses one of the three lakes on the island: the Rano Aroi. A path that begins near the moai platform of Ahu Akivi, which can be traveled on foot or on horseback, allows you to reach the top of the volcano.

One of the most fascinating places on the island is the Rano Raraku volcanic crater, the quarry of the Moai. This smaller volcano is located a short distance from Poike volcano in the eastern part of the island. On the slopes and inside the crater there are the remains of about 400 moai. Inside is another freshwater lake.

Inside another volcanic crater, the Puna Pau volcano, located near the village of Hanga Roa, there is the quarry of the moai hats (pukao).

The official website of the Easter Island National Park.