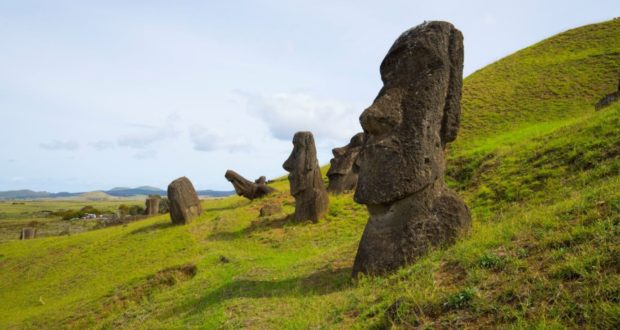 Easter Island immediately connects to one word: MOAI. The Moai are human figures carved in volcanic rock, unique works of Easter Island. According to the most recent studies, the Rapa Nui people sculpted these statues between the years 1250 and 1500. In this short period of time the Rapa Nui civilization sculpted about 900 huge statues that are still largely dispersed on this small and isolated island. Why and how they did it is still a mystery. The only certainty is that the moai represented the ancestors and that they had to be a protection for the villages and their inhabitants.

Moreover, to deepen the mystery there is the fact that at the arrival of the first Europeans the statues were still all standing. But a few years later they had all been demolished. Here too the theories that try to explain what happened abound: clashes between different factions, changes of worship, environmental disasters, epidemics brought by Europeans … What is certain is that most of the moai are still on the island and they contribute to make this barren point of land surrounded by the Pacific Ocean unique and fascinating.

A PARADE OF 15 STATUES: THE AHU TONGARIKI

Some of the moai have been restored and repositioned in their original platforms. The most imposing platform (Ahu) of all is undoubtedly the Ahu Tongariki made up of fifteen moai. In addition, one of the moai of this platform weighs 86 tons and is the heaviest moai ever erected on the island. This platform is located near the southern slopes of Poike volcano a short distance from the moai quarry of Rano Raraku volcano.

Another peculiarity is that all moai platforms face the interior of the island. There is one exception: the Ahu Akivi platform whose moai instead face the sea. It appears that this is simply due to the location of the village.

Another group of very photogenic moai is located in front of the beautiful Anakena beach. This is the only beach on the island. Anakena has two Ahu: the Ahu-Ature with one moai and the Ahu Nao-Nao which has seven, two of which are not complete.

The most spectacular and fascinating place is undoubtedly the large moai quarry which occupies the slopes of the Rano Raraku volcano and also the interior of its crater. Here there are about 400 moai abandoned by their builders. Some are finished, others are sketched in the rock. Here is an incomplete moai which if it had been completed would have exceeded 21 meters in height.

Along all the coasts of the island there are dozens of platforms where the moai remain demolished as the ancient inhabitants of the island had left them. Initially they seem clusters of volcanic stones, but a closer look allows you to discover the remains of this spectacular civilization. You will distinguish the bodies of the statues, just beyond the heads and beyond the hats of these fascinating stone works.

Not far from the village of Hanga Roa is the stone quarry (Puna Pau) where the moai (pukao) hats were carved. Here, too, scattered on the volcanic hill are numerous red volcanic stone hats abandoned by their builders.

Some beautiful moai groups, from where you can admire beautiful sunsets, are located along the coast in front of Hanga Roa, the only inhabited center of the island.

2020-04-09
admin
Previous: Easter Island: the coasts of Easter Island
Next: Stars in the Atacama Desert, an adventurous journey