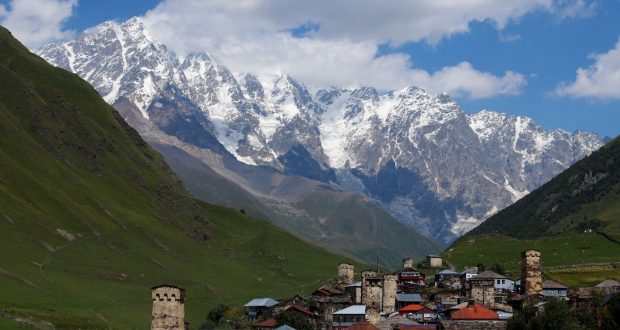 Georgia (Sakartvelos Respublika) is a presidential republic located in the Caucasus, between the Black Sea and the Caspian Sea. This state born with the end of the Soviet Union is bordered by Russia to the north, Azerbaijan to the east, Armenia and Turkey to the south, while to the west it overlooks the Black Sea.

A COUNTRY DOMINATED BY THE MOUNTAINS OF CAUCASO

To the south of the Great Caucasus are the river valleys of the Kura which flows east and flows into the Caspian Sea. The Rioni river instead flows west, and flows into the Black Sea, forming the coastal plain of Colchis (Kolkhet’is Dablobi). The southern border of the country, with Turkey and Armenia, is delimited by the mountainous massif of the Lesser Caucasus, whose peaks do not exceed 3,500 meters.

Georgia’s economy is based on agriculture. In the country citrus, tea, grapes, fruit, tobacco, cereals are grown. The breeding of silkworms and livestock (cattle, sheep) are also important. The exploitation of forests and that of the subsoil (manganese, coal, oil, lead, zinc, iron, copper and lignite) are significant.

The climate of Georgia.

2013-11-25
admin
Previous: The climate of East Timor: when to go to East Timor
Next: Hong Kong: an old colony today the gateway to China