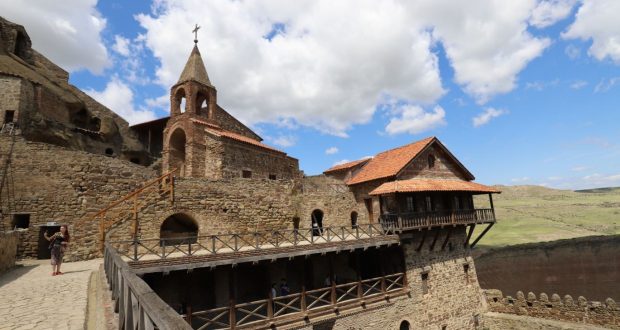 Located in southeastern Georgia on the border between Georgia and Azerbaijan. The orthodox monastery of Davit Gareja is a fascinating historical site made up of a monastery built partly in stone (Lavra Monastery) and partly from caves carved into the rock (Udabno Monastery). The monastery is one of Georgia’s largest monasteries.

THE HISTORY OF THE MONASTERY

Davit Gareja was founded in the 6th century by the Assyrian monk Saint David Garej and was expanded several times until the 17th century. The monastery became one of the most important monastic complexes in medieval Georgia. Over the centuries the monastery became increasingly important, becoming also a pole of artistic and cultural attraction of the whole region.

In the 13th century the Mongolian armies heavily devastated the monastery, which however in the following years managed to recover part of its past importance. Between destruction and reconstruction Davit Gareja survived until the advent of communism in Russia. From 1921 it was abandoned and in the 80s of the twentieth century it was used as a shooting and training range by the troops of the Red Army. In 1991, with the independence of Georgia, monastic life also resumed in Davit Gareja.

Davit Gareja which is located about 70 km south-east of Tbilisi can be reached along a final stretch of dirt road with numerous holes. The lower part of the monastery, the one built in stone, can be easily reached from the parking lot at the end of the road.

THE PATH FOR THE HIGH PART OF THE MONASTERY

To reach the upper part of the monastic complex – where there is a small chapel and the splendid caves of the hermit monks decorated with frescoes made between the IX and XIII century – it is necessary to follow a circular path (it is better to go up the path on the left which at the beginning it runs along the wall of the monastery and which rises more gently) going up to a small chapel from which you have a splendid view of the surrounding areas.

The path then runs north along the border between Georgia and Azerbaijan, it is on this escarpment that the frescoed caves are located, and then descend to the initial monastery. The entire route is approximately 2.5 km long and requires approximately 1 hour and 30 minutes of walking to cover it. The path in some points is rather steep and slippery, so shoes with excellent grip are recommended and trekking poles are very useful.

ALONG THE BORDER BETWEEN GEORGIA AND AZERBAIJAN

The monastery is located right on the border between Georgia and Azerbaijan. Its territory is in fact still subject to border disputes. If you take the path to the rock caves, you will walk right along the border line, occasionally entering Azerbaijan. The telephone network will also welcome you to Azerbaijan. In the past there have been incidents of tourists arrested for trespassing by the guards of Azerbaijan. But in recent years an agreement has been reached between the two countries to allow the visit to the monastery along the entire path that leads to the cave area.

The UNESCO tentative list page of the Davit Gareja Monastery.

2020-01-04
admin
Previous: Sighnaghi and the Bodbe Convent in Georgia
Next: Pasargadae: the first capital of the Persian empire