The road begins in the city of Chicago, Illinois, and ends in the Santa Monica suburb of the city of Los Angeles, California. Route 66 extends for about 2,451 miles, that is, about 3,945 km across 8 states of the USA (Illinois, Missouri, Kansas, Oklahoma, Texas, New Mexico, Arizona and California) and three time zones.

ITINERARY ALONG THE ROUTE 66

Along the route you will find old petrol pumps, historic dining options, motels and monuments reminiscent of the old days when this road was the main gateway to the American West. Some sections of the road were built starting in 1857, but only in 1926 was it named US 66. Route 66 was completely paved only in 1938. Today the road is known as Historic Route 66.

ILLINOIS: THE BEGINNING OF ROUTE 66

The route begins in Chicago and passes through several cities and towns in Illinois before entering Missouri and arriving in the city of St. Louis. In addition to Chicago, the major cities of Illinois crossed by Route 66 include those of Joliet, Bloomington, Springfield and East St. Louis. Route 66 travels 301 miles (484 km) within the state of Illinois.

The city of Chicago in Illinois, lying on Lake Michigan, is the starting point for those who want to complete the entire route of Route 66. Chicago is the most important metropolis of the American Mid-West, full of skyscrapers, but also of places and cultural events, the city is also famous for its blues, jazz and rock music venues. The two main musical events are the Blues Festival, which generally takes place in early June, and the Jazz Festival, which takes place in early September. To get a taste of the city and its most important attractions, 3 nights can be enough, that is, two full days for the visit.

Route 66 crosses the state of Missouri from east to west, covering a total of 317 miles (510 km) within the state. The most important cities that are crossed are those of St. Louis, Rolla, Springfield and Joplin.

Saint Louis is the most important city in the state of Missouri, the city stands at the confluence of the Missouri River with the Mississippi River. Founded by the French in 1764, the city was an important river port along the Mississippi, where boats loaded with people from New Orleans arrived to colonize the new lands thanks to this important waterway. The symbol of the city is the Gateway Arch, a large arch designed by the Finno-American architect Eero Saarinen and the German-American engineer Hannskarl Bandel. The arch measures 192 meters both in height and in width. Among the things to do in Saint Louis is a boat trip along the Mississippi River.

The Meramec Caverns are a group of caves located near the small town of Stanton in Missouri. The caves extend underground for over 7 km and are one of the most visited attractions along Route 66. The caves have been formed by the erosion of large limestone deposits over millions of years.

Kansas is just touched by Route 66, only 13 miles, that is 21 Km of road, cross the territory of Kansas.

Route 66 travels 432 miles (695 km) in the state of Oklahoma, passing through the cities of Tulsa and Oklahoma City.

The city of Oklahoma City is located in the center of the homonymous state of which it is the capital. Oklahoma City had great development in the 1930s thanks to the discovery of oil. The city is a succession of skyscrapers and oil wells. In the city it is worth visiting the Bricktown district with characteristic shops and clubs.

This Oklahoma town is a must for anyone traveling along Route 66, in fact there is the museum dedicated to this legendary road, the Route 66 Museum. The museum displays old cars, signs, objects and anything else referring to Route 66.

Route 66 enters the state of Texas where some of the best preserved stretches of this old American road are found. The entrance to Texas is marked by the mythical U-Drop Inn of Shamrock, an ancient restaurant and petrol pump in the art-Decò style built in 1936.

Route 66 crosses the monotonous expanses of the Texan plains and arrives near the city of Amarillo at the Cadillac Ranch where there is a curious monument dedicated to Cadillacs, it is 10 Cadillacs driven into the ground.

The midpoint of Route 66 is located in Adrian where the Midpoint Café is located, at this point the distance between the miles traveled and those to be covered is exactly the same.

In the town of Glenrio, Route 66 enters New Mexico. The landscape becomes more bleak but especially in the western section of the state rock formations typical of the American West are beginning to be seen.

Tucumcari is the largest town on Route 66 between Amarillo in Texas and Albuquerque in New Mexico. In this town there are a large number of vintage motels and restaurants built in the 1930s, 1940s, and 1950s, the most famous of which is the Blue Swallow Motel.

In the town of Santa Rosa there is an evocative museum of cars (Auto Museum) with about 30 models of vintage cars on display.

After passing Albuquerque and just before the city of Gallup, you cross the Continental Divide, from this point on, the waters of the rivers reach the Pacific ocean.

The most famous building in the city of Gallup is the historic El Rancho Hotel & Motel which in the 1940s and 1950s hosted numerous American cinema stars. Here, in fact, the typical scenes of American western films were shot. Actors such as John Wayne, Humphrey Bogart, Katharine Hepburn, Kirk Douglas, Spencer Tracy, Gregory Peck and Burt Lancaster have stayed in the Motel.

The Petrified Forest National Park is a very beautiful landscape area with characteristic and multicolored rock formations and characterized by the presence of fossil formations of ancient petrified trees. The fossil trunks of the were formed over millions of years, this fossilization process has transformed the wood of the trees into quartz stones but which still maintain the appearance of wooden trunks.

A few tens of miles west of the Petrified Forest Route 66 crosses the town of Winslow which became famous in 1972 when it was mentioned in the Eagles’ famous song “Take it Easy”.

Near Winslow the Meteor Crater is another place to visit, it is a meteor impact crater formed about 50,000 years ago whose diameter is 1,200 meters and its depth is 170 meters. Meteor Crater.

The Grand Canyon is certainly Arizona’s most spectacular natural attraction. Excavated by the Colorado River over millions of years, the Grand Canyon stretches 446 km, has a maximum width of 29 km and its maximum depth is 1,600 meters. Grand Canyon.

A section of Route 66 which has remained intact and perfectly preserved
begins at the town of Seligman. In the town of Seligman there is the shop of the famous barber Angel Delgadillo who is one of the founders of the Historic Route 66 Association of Arizona. Seligman is a village left over from the 50s and 60s of the twentieth century with shops, motels and bars that recall that time, visiting Seligman seems to go back in time.

In this ancient mining town you can breathe the typical atmosphere of the old West made of wooden buildings, saloons and mines. Oatman is the last inhabited center on Route 66 before entering California.

2020-04-28
admin
Previous: Las Vegas: the gambling capital of United States
Next: Denver: one of the most modern and vibrant American cities 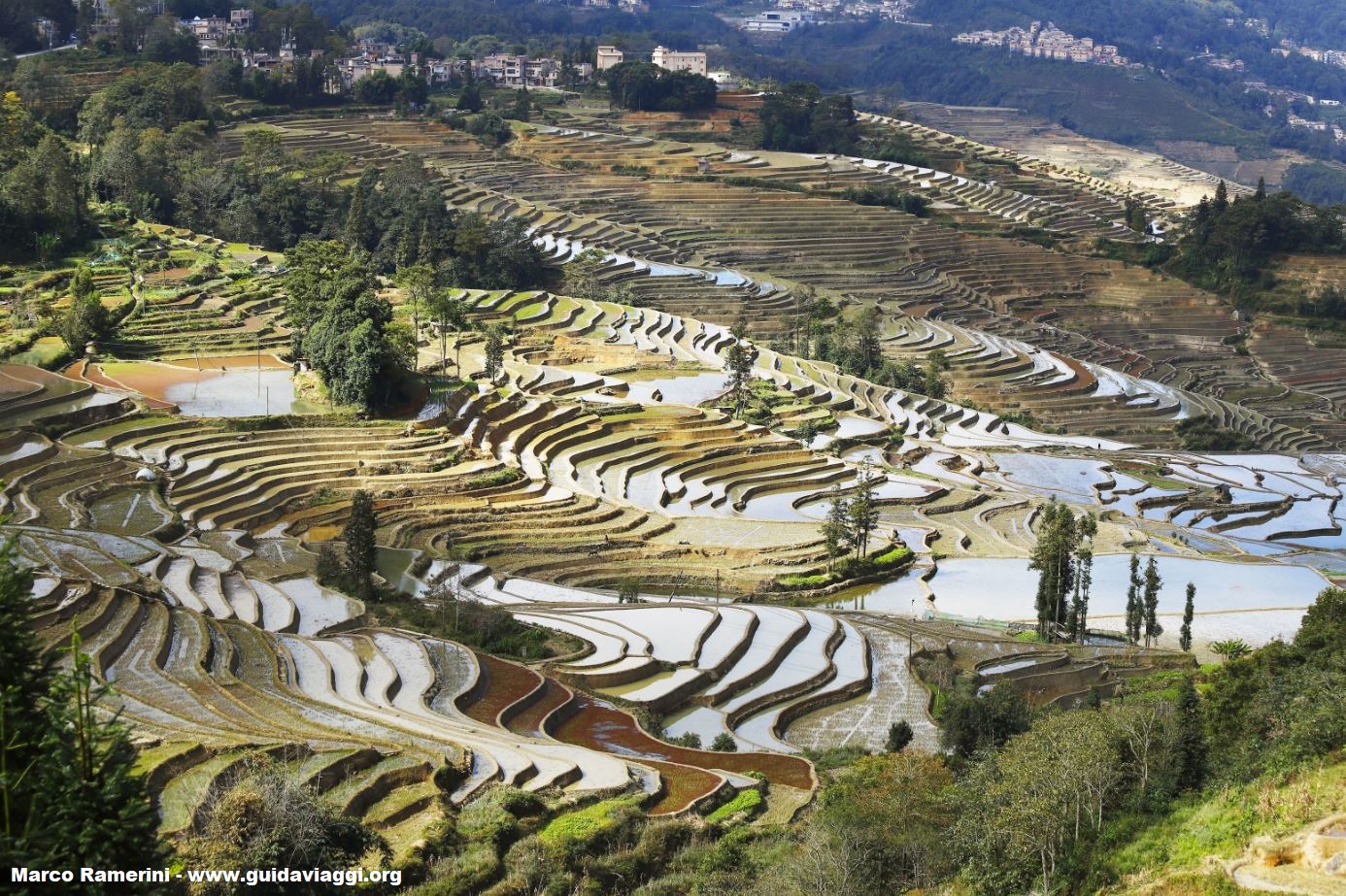 This time I visited a province of China characterized by a wide ...