Melbourne and the bay of Port Phillip mark the division between the western and eastern coasts of the Australian state of Victoria. The two coasts, although only a few hundred kilometers apart, seem to belong to two completely different worlds. A trip along the west coast and in particular along the Great Ocean Road is an unforgettable experience.

The Great Ocean Road, which is 240 km long, was built around 1920 to connect coastal towns together. The road begins in the town of Torquay about 100 km south-west of Melbourne. Here the waves of the ocean are suitable for surfing, the centers of Bells Beach and Jan Juc are two of the best known surf resorts in the world. Here every year around Easter week the best surfers gather for spectacular races. The road continues south until it reaches Lorne, one of the most popular seaside resorts for the inhabitants of Melbourne, a paradise for water sports and fishing.

Beyond the town of Lorne begins the most spectacular stretch of road. Then you cross Apollo Bay and enter Otway National Park, where the rainforest goes down to the sea. In the right season in Melba Gully State Park at night thousands of fireflies turn night into day. An interesting stop is the one at the Cape Otway lighthouse. This lighthouse was built in 1846 to try to decrease shipwrecks. In fact, along this coast, known as the Shipwreck Coast, there are over 80 shipwrecks.

When the road returns to the coast, it reaches Port Campbell National Park. Here the coast is formed by a breathtaking chain of rocky rocks. At this point the cliffs rise to over 60 meters above the sea. Shortly afterwards the famous “Twelve Apostles” appear, the natural wonder of this stretch of coast. They are 12 huge rocks that rise majestically from the waves of the sea, and reach heights of 45 meters. Particularly beautiful is the view of the Twelve Apostles at sunrise or sunset, when they quickly change color with the rising or falling of the sun.

Close to the Twelve Apostles, other natural wonders lie between the towns of Princetown, Port Campbell, Peterborough and Allansford. Gibsons Steps lies 5 kilometers west of Princetown. Here a staircase of 86 steps allows you to reach the beach below, with the rocky walls rising 70 meters and where the huge rock formations of Gog and MaGog are located. While 3 km east of Port Campbell is the so-called Grotto, a geological formation created by the water that has corroded the limestone rock.

Beyond the town of Port Campbell, 6 km to the west, there is The Arch, a rocky structure that gives its best when the sea is rough and the waves break all around. Just one kilometer to the west is the “London Bridge” or “London Arch”, another rock formation that partially collapsed in 1990, but is still very fascinating. Finally just beyond is the Loch Ard Gorge, a small opening towards the open sea, between the cliffs. Bay of Martyrs opens a few miles from Peterborough. This is an ideal place to admire the breathtaking stacks of the nearby Bay of Islands, which are particularly beautiful at sunset when the islands and Massacre Point are backlit by sunlight.

Traveling along the Great Ocean Road you can also relive the history of the fishing villages and seaports of the state of Victoria. In the past, large merchant ships and whaling ships stopped at Warrnambool, Port Fairy and Portland. Today the whale is a protected species. In the winter months, i.e. from June to September, whales approach the coast. In Logan Beach, there is a platform specially created to admire them. Here they normally approach up to 100 meters from the coast. 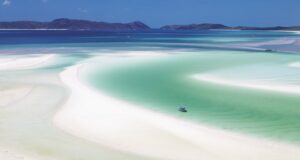 Melbourne: the cultural capital of Australia

Guide to Australia Hotels and Bed and Breakfasts

The climate of Coral Bay: when to go to the Ningaloo Reef

The climate of Karijini: when to go to Karijini Park

Karijini National Park: the park of the canyons and waterfalls

The climate of Broome: when to go to Broome

Mount Olgas (Kata Tjuta): the house of the Wanambi snake

Kings Canyon: a spectacular canyon in the Australian desert

The climate of Perth: when to go to Perth

Perth: one of the most livable cities in Australia

The climate of Western Australia: when to go

The climate of Northern Territory: when to go

Northern Territory: from the ocean to the heart of Australia

The climate of Victoria: when to go to Victoria

The climate of South Australia: when to go

The climate of Canberra: when to go to Canberra

The climate of Lord Howe island: when to go to Lord Howe

The climate of New South Wales: when to go

The climate of Queensland: when to go to Queensland

The climate of Tasmania: when to go to Tasmania

The climate of Australia: when to go to Australia