Home / Europe / Italy / Florence: the cradle of Humanism and the Renaissance 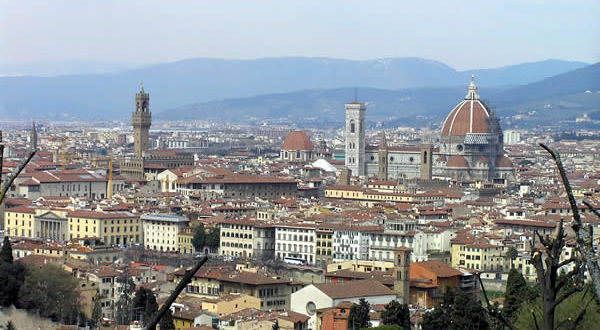 Florence is one of the most popular and sought after destinations by world tourism. This city of about 400,000 inhabitants, whose metropolitan area reaches about 1,500,000 inhabitants is the capital of Tuscany. The city is considered the birthplace of the Renaissance and is world famous for its magnificent art and architecture.

Built on the site of an ancient Etruscan settlement, Florence, the symbol of the Renaissance, grew and developed in the Middle Ages. Until reaching a role of global importance at a cultural and economic level under the rule of the Medici family in the fifteenth and sixteenth centuries.

A HISTORICAL CENTER UNIQUE IN THE WORLD

UNESCO included, in 1982, the entire historic center of Florence in the list of world heritage sites. Its 600 years of extraordinary artistic activity can be seen above all in its thirteenth-century cathedral, the cathedral of Santa Maria del Fiore. But the whole city is a living testimony of the splendor reached by Florence in that period. This is clearly visible in the church of Santa Croce, in the Uffizi gallery, in Palazzo Pitti, and in the works of the great Florentine masters such as Giotto, Brunelleschi, Botticelli and Michelangelo.

Cimabue and Giotto, the fathers of Italian painting lived in Florence. As well as Arnolfo and Andrea Pisano, renowned architects and sculptors. Artists such as Brunelleschi, Donatello and Masaccio, founders of the Renaissance, Ghiberti and the Della Robbia, Filippo Lippi and Beato Angelico. Botticelli, Paolo Uccello and the universal geniuses of Leonardo and Michelangelo. All of them have contributed to making the Tuscan city unique worldwide.

WHAT TO SEE: THE MAIN ATTRACTIONS OF FLORENCE

Florence’s best-known attraction is the city’s cathedral with its dome. Santa Maria del Fiore, known as the Duomo. Its magnificent dome was built by Filippo Brunelleschi. The nearby bell tower (designed by Giotto) and the Baptistery are also primary attractions.

The heart of the city is the Piazza della Signoria, the focal point of the origins of the city and the history of the Florentine Republic. This splendid open-air museum evokes centuries of grandeur and power. The majestic Palazzo Vecchio (XIV century) still dominates the square with its crenellated tower.

Other attractions in the square are the Loggia della Signoria, the Uffizi Gallery (one of the most important museums in the world), the Palazzo del Tribunale della Mercanzia (1359), the fountain of Neptune (called Biancone) by Bartolomeo Ammanati, and the Palazzo Uguccioni (16th century).

ONE OF THE MOST FAMOUS MUSEUMS IN THE WORLD

The Uffizi houses one of the oldest and most famous art museums in the world. The museum contains countless masterpieces by Cimabue (Maestà), Duccio (Maestà), Giotto (Our Lady of All Saints, the Polyptych of Badia)

Then there are works by Simone Martini (the Annunciation), Paolo Uccello (the Battle of San Romano), Piero di Cosimo (Perseus who frees Andromeda), Albrecht Dürer (the Adoration of the Magi), Titian (Flora, the Venus d Urbino), Parmigianino (the Madonna with the long neck), Fra Filippo Lippi (Madonna and Child with two Angels), Andrea del Verrocchio (the Baptism of Christ), Hugo van der Goes (the Portinari triptych).

Central nucleus are the rooms of masters such as Sandro Botticelli (Spring, the Birth of Venus, the Adoration of the Magi and other works), Leonardo da Vinci (the Annunciation, the Adoration of the Magi), Michelangelo (the Doni Tondo), Raphael (Our Lady of the Goldfinch, Pope Leo X with Cardinals Giulio de ‘Medici and Luigi de’ Rossi), Caravaggio (Bacchus, the Sacrifice of Isaac, the Medusa), Piero della Francesca (diptych of Duke Federico da Montefeltro and della Duchess Battista Sforza d’Urbino).

THE MOST FAMOUS SCULPTURE IN THE WORLD: MICHELANGELO’S DAVID

In addition to the Uffizi, Florence has other museums of global importance: the Bargello has numerous sculptures, and contains many masterpieces of the art of sculptors such as Donatello, Giambologna, and Michelangelo. The Accademia Gallery houses Michelangelo’s famous David and his unfinished slaves (Prigioni).

The San Marco museum houses the masterpieces of Fra Angelico. After crossing the Arno on the Ponte Vecchio, you reach the huge Palazzo Pitti, with the Palatine Gallery which contains part of the Medici family’s private collection. In addition to the Medici collection, the palace also contains a large number of Renaissance masterpieces including works by Raffaello and Tiziano as well as a large collection of modern art, costumes, and porcelain.

Around the Pitti Palace is the Boboli Garden, with elaborate landscape and numerous sculptures. The Basilica of San Lorenzo houses the Medici Chapels, the mausoleum of the Medici family. The Basilica of Santa Croce contains the monumental tombs of Galileo, Michelangelo, Machiavelli, and many other famous Italians. As for Dante inside the Basilica there is only a cenotaph, Dante’s Tomb is located in Ravenna.

Other important basilicas and churches in Florence are those of Santa Maria Novella, Santo Spirito, San Miniato al Monte, Ognissanti, and Orsanmichele. The Arno river cuts the old city in two, one of the bridges that cross it is the famous Ponte Vecchio, full of goldsmith shops. The bridge also houses the famous Vasari Corridor which connects the Uffizi with Palazzo Pitti.

The public transport service in the city is carried out by the ATAF. The tickets are on sale from tobacconists, bars, newsagents and also via SMS. The main bus station is located near the Santa Maria Novella train station. In the city there is no metro network, but there is an urban tram network called TramVia. For now three lines are working. The first one that connects Scandicci (where there is a convenient exchanger parking inside the A1 highway) to the Central station of Santa Maria Novella. A second line connecting the station with the airport. A third line connects the station with the Careggi hospital.

The climate of Florence.