Home / Europe / Italy / The Roman Forum and the Imperial Forums: the center of ancient Rome 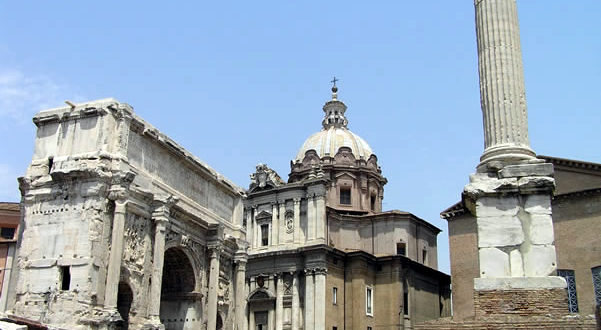 This area of the city was at first the market square, and later the civic center of ancient Rome. The Roman Forum was the central area around which ancient Rome developed. Here the commerce, business, market and administration of justice took place. The market, the court and the most important religious buildings were located in this area.

Originally, the site of the Forum had been a swampy lake where the waters of the surrounding hills reached. The place was drained by the Tarquini with the construction of the Cloaca Maxima. This allowed the construction of the first buildings of the Roman Forum. The Temple of Saturn was one of the most significant buildings located in the Roman Forum.

An important function of the Forum, both in republican and imperial times, was to be the place where military parades were held and where the triumphs of generals and emperors were celebrated.

The archaeological area of ​​the Forum is one of the richest in the world, and for all lovers of ancient art and history, a visit to the Imperial Forums represents one of the most suggestive stops that Rome can offer. Today, the Forum known as the Roman Forum can appear as a disordered set of ruins for the uninitiated. But with a little imagination, the Roman Empire can be brought back to life on this site.

THE FORUM OF CAESAR

The construction of the Forum also had another motivation, namely the celebration of Caesar’s power. In fact, he built the Temple of Venus Genetrix in his Forum. Legend has it that at the battle of Pharsalus, Caesar made a vow to build a temple to Venus Genetrix, the mythical ancestor of the Gens Giulia, and once he returned to Rome he had that temple built in the center of his forum.

THE FORUM OF AUGUSTUS

The Forum of Augustus was built to house a temple in honor of Mars. The Temple of Mars Ultor. This new complex is located at a right angle to the Forum of Caesar.

THE FORUM OF PEACE OR FORUM OF VESPASIAN

The Temple of Peace, also known as the Forum of Vespasian, was built in 75 AD. under the emperor Vespasian. The monument was built to celebrate the conquest of Jerusalem.

THE FORUM OF NERVA

The construction of this forum was born from the decision of the emperor Domitian to unify the area between the Temple of Peace and the Forum of Caesar and Augustus. In fact, he decided to build another monumental forum that connected all the other Forums. The temple dedicated to Minerva was built. Due to Domitian’s death, the forum was inaugurated by his successor, Nerva, who gave it his name.

THE FORUM OF TRAJAN

The conquest of Dacia was the occasion for the construction of the Trajan’s Forum. The forum was inaugurated between 112 and 113 AD. This was the last of the imperial forums to be built in ancient Rome. The Forum consisted of a large square lined with arcades. On the sides of the square were the markets. The Piazza del Foro was closed by the Basilica Ulpia, with Trajan’s column behind it. In front of the basilica, a monumental facade was the background for a large equestrian sculpture of the Emperor.

The Roman Forums are part of the Colosseum Archaeological Park.

Booking.com
2020-03-15
admin
Previous: The Trevi Fountain: the most famous fountain in Rome
Next: The Pantheon: an architectural marvel of antiquity