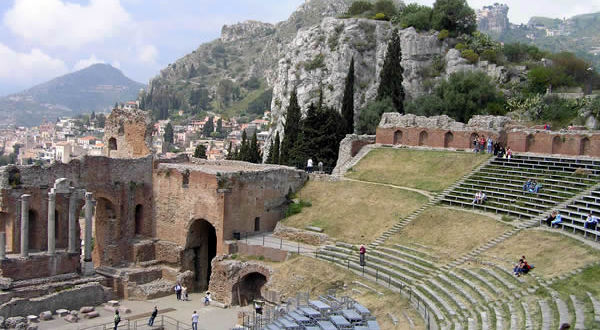 Sicily is the largest island (25,710 sq km) in the Mediterranean Sea. It is located in the center of the Mediterranean, south-west of the Sicilian Channel. This channel divides it from Africa (Tunisia), while, to the east, the Strait of Messina separates it from Calabria. The island is bordered by the Tyrrhenian Sea to the north, the Ionian Sea to the east and the Sea of Sicily to the south west.

Around Sicily are a series of archipelagos that administratively belong to the island: the Aeolian islands, the Egadi islands, the Pelagie islands (Lampedusa, Linosa and Lampione), Ustica and Pantelleria. The mountains of the island are formed by the mountain ranges of the Nebrodi, Erei, Peloritani, and Iblei.

Sicily is one of the most fascinating destinations in the Mediterranean. With a coastline of about a thousand kilometers, Sicily offers the visitor the greatest imaginable variety of terrestrial and marine environments. There are wide sandy beaches, sheer cliffs, fantastic cities of art, Baroque treasures, volcanoes, famous tourist and social places, an internal territory enriched by the remains of ancient civilizations and by the survival of centuries-old traditions.

Nature has given Sicily Mount Etna, the highest active volcano in Europe, a spectacular coast and fertile soil. Sicily is a land of breathtaking coasts and lush vegetation, of stratified cultures, fallen empires, and ancient myths. There are huge Romanesque cathedrals, the best preserved Greek temples in the world, Roman amphitheatres and magnificent Baroque palaces.

WHAT TO SEE: THE MAIN ATTRACTIONS OF SICILY

Sicily is an island rich in history, sun and sea, a treasure trove of artistic and natural treasures. Home to ancient civilizations and rich in monuments and architecture from the Arab, Byzantine, Norman and Baroque periods that reflect the different cultures that have followed one another over the centuries.

Sicily, as well as for its numerous historical references and archaeological sites. It also attracts tourists for its natural environment, for its coasts and the sea, for the islands of the archipelagos that surround it. And for natural wonders such as the largest volcano on the European continent, Etna.

A LAND FULL OF THINGS TO SEE

The tourism industry is a sector in continuous development favored by the presence on the territory of the island of numerous archaeological areas such as Morgantina, Agrigento (Valley of the Temples), Selinunte, Segesta, Tindari, Piazza Armerina (Villa Romana del Casale), Syracuse, Pantalica, etc. But in Sicily there are also some splendid cathedrals of the Norman period (Cefalù, Palermo, Monreale). Or refined churches in the Sicilian Baroque style (Noto, Scicli, Modica, Ragusa Ibla, etc.). But also famous worldly and cultural places, such as Taormina, Caltagirone, Acireale, Syracuse, Palermo, Monreale, Cefalù.

Those interested in natural scenarios can choose from the numerous natural reserves such as the regional parks of Etna, Madonie and Nebrodi, or as the volcanic island of Pantelleria. The archipelagos of the Pelagie islands, the Aeolian islands and the Egadi islands are very beautiful from a naturalistic point of view.

The climate of Sicily.

Booking.com
2020-03-15
admin
Previous: Sardinia: the island with the most beautiful sea in Italy
Next: Florence: the cradle of Humanism and the Renaissance