Home / Europe / Italy / The Colosseum: the largest amphitheater in the world 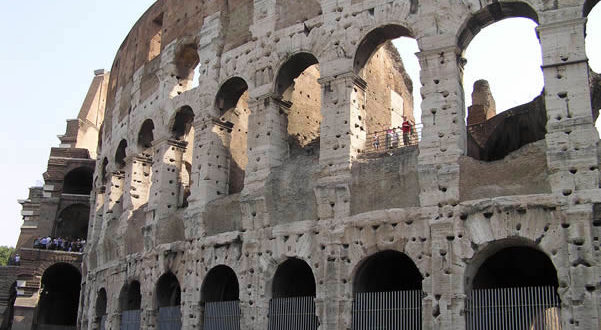 The Colosseum, originally known as the Flavian Amphitheater, is an amphitheater, which could hold up to 70,000 spectators. This structure was once used primarily for gladiator fights as well as a variety of other events. The building was built between 72 A.D. and 90 AD, during the reigns of the emperors of the dynasty Flavia, Vespasiano and Tito.

The name Colosseum derives from a colossus, a 40 meters high statue of Nero, which stood near the site where the amphitheater was built. The building was built on the site of Nero’s palace, the Domus Aurea. The structure was used for gladiator fights and for shows with ferocious beasts (venationes).

The colossal amphitheater is elliptical in shape with three floors. Its main axis, north-west – south-east, is 188 meters long, and its minor axis 156 meters wide. The building is 48 meters high, while its circumference exceeds 500 meters. Restored under Septimius Severus it was used for fighting until the 5th century AD. During the Middle Ages the Colosseum was transformed into a fortress and the precious marbles that covered it were looted to build new buildings and churches.

The exterior of the building is built with large travertine blocks. The wooden floor of the arena is elliptical, has a main axis of 86 meters in length and a minor axis of 54 meters, and was covered by sand. Part of the arena floor has been redone. Under the Colosseum, a dense network of underground passages were once used to transport wild animals and gladiators.

The Colosseum is today one of the main and most famous attractions of the city of Rome and is still the largest amphitheater in the world. In the Colosseum. On Good Friday, the Via Crucis usually celebrated by the Pope takes place. Finally, since 1980 the Colosseum has been included in the UNESCO World Heritage List.

2020-03-07
admin
Previous: Rome: capital of an immense empire
Next: The Trevi Fountain: the most famous fountain in Rome