Home / Europe / Italy / The Pantheon: an architectural marvel of antiquity 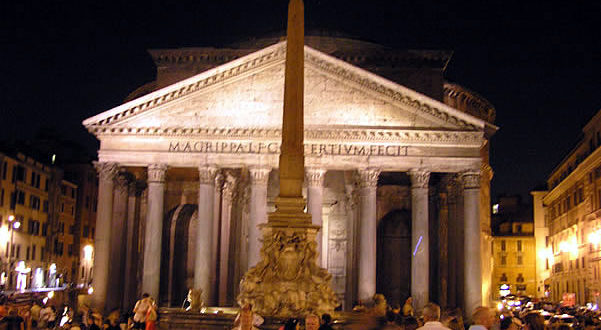 The Pantheon is an ancient temple of ancient Rome. Originally built to pay homage to the pagan gods worshiped in the Roman Empire, it is now a cult building of the Roman Catholic church.

The Pantheon was in fact rebuilt during the reign of Hadrian. On this occasion the original dedicatory inscription was placed on its facade, which was located on the oldest part of the building. In the original inscription on the porch of the building we read: “M · AGRIPPA · L · F · COS · TERTIUM · FECIT” (Marco Agrippa, son of Lucius, consul for the third time, built this building).

The Pantheon is a circular building and at its entrance there is a portico with majestic granite columns. The Pantheon building consists of a large rotunda preceded by a pronaos. The ceiling of the dome is coffered, and was originally gilded. In the upper part of the structure there is a circular opening which is called “oculus”. This opening, through which the light passes, measures 9 meters in diameter and is surrounded by a bronze frame.

The height from the floor of the building is 43.20 meters. This measurement is the same as the internal diameter of the drum. The dome is the largest in the world surviving from antiquity. Especially noteworthy is that it was the largest dome in the world until Brunelleschi’s dome in Florence was completed in 1436.

The style of this building with a large circular domed cell was not common in Roman architecture. In fact, this building is unique among the buildings of the Roman Empire. In the Byzantine era, at the beginning of the seventh century after Christ, the Pantheon was converted into a Christian church. This fact has in fact allowed its excellent conservation over the centuries.

Booking.com
2020-03-15
admin
Previous: The Roman Forum and the Imperial Forums: the center of ancient Rome
Next: Sardinia: the island with the most beautiful sea in Italy