Home / Europe / Italy / The Trevi Fountain: the most famous fountain in Rome 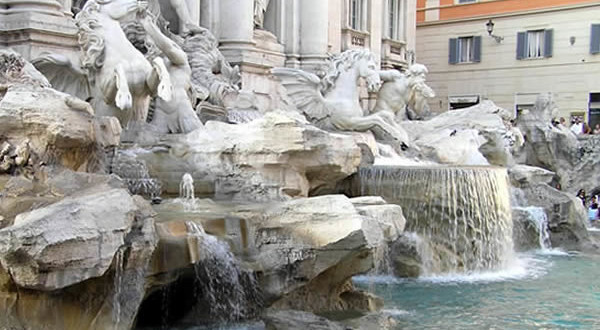 The Trevi Fountain is certainly the most famous of Rome’s fountains, located in the historic center of the city, a short distance from Piazza Colonna and the Quirinale palace. The fountain was built – under the popes Clement XII, Benedict XIV and Clement XIII, between 1732 and 1762, first by Nicola Salvi and after 1751 by Giuseppe Pannini.

THE TERMINAL POINT OF AN ANCIENT ROMAN AQUEDUCT

The fountain, a mixture of styles between classic and baroque, is located against the Palazzo Poli. The facade of the building is an integral part of the scenography of the fountain. The fountain is the terminal point of the ancient aqueduct of the Acqua Vergine (Aqua Virgo). Which was built by Agrippa and inaugurated on 9 June 19 BC.

The Aqua Virgo Aqueduct remained in use throughout the Middle Ages. It was restored several times in the eighth century, in the twelfth century and in the mid-fifteenth century. But the original springs were only connected again in 1570 by Pius V, who placed a basin on the opposite side of that of the current fountain. The figures depicted on the fountain are intended to illustrate the history of the Aqua Virgo.

The scenography of the facade of the fountain is dominated by a grandiose attic with balustrade and allegorical figures. In the center there is an inscription with the coat of arms of Clement XII. Further down, in the central niche, is the grandiose statue of the ocean by Pietro Bracci towed on the chariot, in the shape of a shell, by two sea horses led by tritons. In the side niches there are the statues of Health and Abundance, works by Filippo Della Valle. These statues are dominated by the representations of the Virgin Mary indicating the source to the soldiers and by Agrippa who approves the drawing of the aqueduct.

A FAMOUS FOUNTAIN THANKS ALSO TO THE FILMS

Formed by a huge tank that personifies the sea. The Trevi fountain is a perfect mix of Baroque architecture and sculpture, which has become famous in the world thanks to films that have become classics of world cinema. Famous is the scene present in Fellini’s film “La Dolce Vita” in which the protagonist Anita Ekberg dives into the basin of the Trevi fountain, inviting the other protagonist of the film, Marcello Mastroianni, to do the same.

It also overlooks the square the church of SS. Vincenzo and Anastasio, whose facade, full of columns, dates back to 1650. At the end of the 90s some excavation works led to the discovery of a vast and complex archaeological area, now reorganized and open to visitors, called “The city of water”. From the excavations, traces of an insula from the Neronian era emerged, later converted partly into a stately domus, in the mid-fourth century, and partly into a large cistern for the collection of Aqua Virgo. Access to the underground archaeological area of about 400 square meters is located in vicolo del Puttarello n ° 25, and is open from 11 to 15.

2020-03-15
admin
Previous: The Colosseum: the largest amphitheater in the world
Next: The Roman Forum and the Imperial Forums: the center of ancient Rome