Home / Asia / Georgia / Travel to Georgia: In the heart of the Greater Caucasus 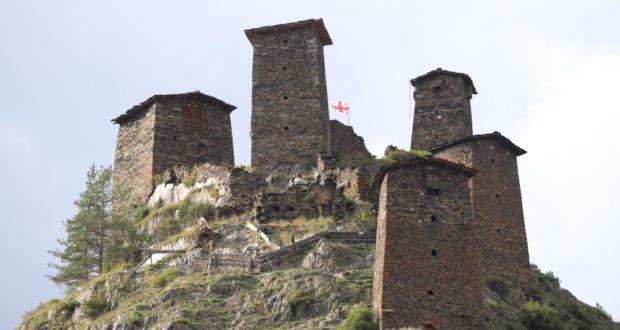 Georgia is a small country where 8-10 day itineraries are usually offered. In such a short time, however, it is not possible to visit some areas of the country, so my choice fell on a longer (two weeks), but more complete itinerary. Even with two weeks you will not have the opportunity to see every corner of Georgia, but in your travel you will see most of the main tourist attractions of this beautiful nation located between Europe and Asia.

THE MOUNTAINS OF THE CAUCASUS

The travel to Georgia lasts 15 days. It is a very complete and well-structured itinerary that allows you to have a complete view of the country. The trip allows you to see the mountainous areas of the country. In the 15 days of the tour the mountains of the Greater Caucasus are crossed three times with a few days of visiting the magnificent and isolated Tusheti, one day is dedicated to Mount Kazbek (which unfortunately due to the low clouds I have not seen), while a couple of days are finally dedicated to the splendid Svaneti and its mountain villages that are part of the UNESCO World Heritage Site.

Among the mountain places the Tusheti and Svaneti are the most beautiful. But this choice of mine is certainly marred by the fact that on the day dedicated to Mount Kazbek (5,047 meters above sea level) we had low clouds that prevented the view of the mountain with its glaciers which certainly would have changed my opinion on the visit.

The trip also allows the visit of some cities and monasteries excavated in the rock such as the Davit Gareja rock monastery located on the border with Azerbaijan. Where after an hour of trekking you can admire beautiful caves with religious frescoes. Another beautiful location is the cave city of Uplistsikhe whose golden age dates from the 6th century BC. until the 1st century AD.

But I particularly liked the rock city of Vardzia located in southern Georgia near the border with Turkey. The city occupies a huge rockface which at the time of its construction (XII century) hid from view the city carved into the rock. But that an earthquake of the late thirteenth century brought to light irreparably damaging the underground city. The city was very large: built on 13 levels with dozens of caves, tunnels and stairways that were once all in the heart of the mountain. Epic work. To be mentioned, before arriving in Vardzia a splendid fortress, the fortress of Khertvisi, located on a rocky outcrop.

The capital Tbilisi is visited three times: on arrival, on return from Tusheti and at the end of the itinerary. The city is very beautiful and full of life and repeated visits allow you to appreciate it at its best. The choice of the central hotel makes it possible to move freely on foot during your free time.

During the itinerary there is no shortage of visits to monasteries and churches for which Georgia is famous. In the early days of the tour the churches of the capital, Tbilisi, stand out, such as: the Cathedral of Sioni, the Church of Metekhi, the Basilica of Anchiskhati etc. In Kakheti the most beautiful building is the Alaverdi cathedral. Georgia’s ancient religious capital, Mtskheta, has several interesting churches that are part of the UNESCO World Heritage Site. Gremi with its church surrounded by walls. The city of Akhaltsikhe with the restored citadel and examples of a mosque, church and synagogue. The splendid complex of churches of the Gelati Monastery (UNESCO World Heritage Site) near Kutaisi.

THE BLACK SEA, THE CAVES AND THE MUSEUMS

One day we also stop along the Black Sea where we stay in the modern city of Batumi. A few kilometers away we visit the beautiful Roman fortress of Gonio-Asparus, with perfectly preserved walls. Probably one of the easternmost outposts of the Roman Empire.

On another day we also visit the karst cave of Prometheus near Kutaisi an interesting visit which ends with a short boat cruise inside the caves. Too bad for the too many colored lamps inside the caves that distort the colors. One of the last visits is reserved for the delusional Stalin Museum which is housed in his hometown: Gori.

Among the museums very interesting are those of Tbilisi (National Museum of Georgia). But also the small museum of the Roman fortress of Gonio, the Ethnographic Museum of Mestia in Svaneti and the museum of the Akhaltsikhe citadel.

FINAL CONSIDERATIONS REGARDING THE TRAVEL TO GEORGIA

The Tusheti, with the beautiful landscapes of mountain pastures and the villages with tower houses of Omalo and Dartlo, is the place of this trip to Georgia that I liked most. The road of Abano Pass that touches the 3,000 meters of altitude with impressive precipices, but also with spectacular views, is a journey in the journey. Even the Svaneti with the historic villages of Mestia and Ushguli with the snow-capped mountains of the Great Caucasus in the background are worth the trip. Among the churches I particularly liked those that are inside the Gelati Monastery and the churches of Mtskheta. The rock city of Vardzia is another attraction of the trip. I also liked the Roman fortress of Gonio-Asparus and the beautiful fortress of Khertvisi near Vardzia.

The Georgian population is welcoming and helpful, but it is still a mountain population and does not dispense too many smiles. The country is safe and I have never felt any risks or problems even at night in the capital. The food is excellent although sometimes repetitive. Note the absolute lack of sweets during meals, even if there are spectacular pastry shops, worthy of note is that of Akhaltsikhe near the hotel where we were staying. Excellent fruit that can be purchased directly in the many stalls along the way. The cost of living for a European is negligible, you eat at the restaurant with 5 euros.

If you want to know more about the places visited in my travel to Georgia visit the pages under the category Georgia.

2020-04-30
admin
Previous: The Pumice Stone Field in the Puna, Argentina
Next: Persepolis: the ceremonial capital of the Persian Empire