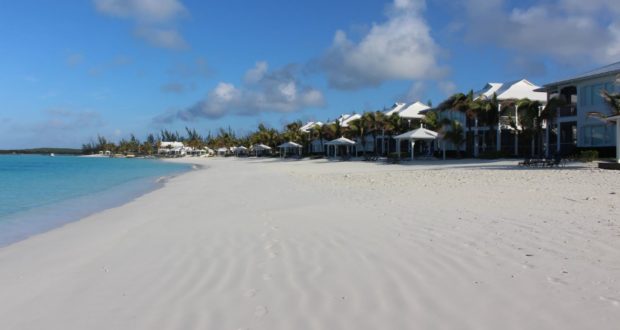 The Cape Santa Maria Beach Resort is a beautiful property located at the northern end of Long Island one of the islands of the Bahamas. This Resort stands along an enchanting beach that stretches a few kilometers off the coast of Galliot Cay, a few kilometers from the place where in October 1492 Christopher Columbus landed for the third time on an island in the Bahamas (the first islands of the New World visited by Columbus were San Salvador and Rum Cay).

The Resort is owned by a Canadian group, the Oak Bay Marine Group which owns several hotels in British Columbia. The structure of the Cape Santa Maria Beach Resort is very well maintained and well cared for in every detail. There are three types of rooms: Beachfront Villa, Beachfront Bungalow and Two-Bedroom Beachfront Bungalow. Overall there are a total of ten bungalows and five villas (each of which is divided into 4 apartments, two on the ground floor and two on the upper floor, for a total of 20 apartments).

As the name suggests, the different types of rooms are all beachfront. The Two-Bedroom Beachfront Bungalows are excellent for families with children because they have a bedroom with two single beds and a bedroom with two other single beds. In addition to the bathroom and shower there is also, at the entrance, a beautiful open living room – equipped with sofas – all protected by a mosquito net from where you can see the beach and the sea and from where you can admire spectacular sunsets over the sea.

In front of your bungalow where the beach begins there is a comfortable kiosk with deck chairs where you can relax and admire the landscape of the beach and the sea. Here there is also a comfortable shower. Another foot shower is strategically positioned in front of the entrance to the bungalows. The rooms of the Resort are practically apartments without kitchen. Room amenities include a fridge and safe. Interesting thing to note is that tap water is drinkable. The Beachfront Bungalows are similar to the Two-Bedroom Beachfront Bungalows with the only difference that they have a single room with two single beds.

THE VILLAS OF THE RESORT

In addition to the bungalows in the Resort there are also Villas …. we have been to visit one. We saw the one on the ground floor. Living area: At the entrance there is a lounge with sea view, a large American kitchen with counter, a large crystal dining table.

Sleeping area: a bedroom with two large beds with bathroom and a bedroom with two single beds and another bathroom. Each villa body has two apartments on the ground floor and two apartments on the first floor. The villas are very beautiful, but in my opinion they were built too close to the beach, if they had been built a few tens of meters more internally they would have had a lesser impact on the idyllic landscape of the beach.

The staff of the Resort is another highlight, they are all very kind, friendly and reliable. All the services from the restaurant, to the bar, to the reception are well managed. The resort offers free kayaks and several other “naval vessels”. Bicycles located near the reception are also free. Only the use of a small sailboat is to be paid.

THE SEA AND THE BEACH

The sea and the beach of Cape Santa Maria are the strengths of the Resort. Here you can relax and swim in the beautiful Caribbean waters. Obviously along the beach, there are few fish, but to see some just move a few meters towards the rocks at the entrance of the lagoon, here among the rocks and corals you can admire the colorful fish of the reef. In the lagoon it is also easy to come across starfish of various sizes and sometimes even small sharks can be seen.

Exploring the lagoon is a fun and instructive pastime. You can observe the pools that the low tide has left on the rocks trapping numerous small colored fish. Some pairs of small birds also keep you company. Snorkeling among the underwater rocks is also very popular with everyone. Children will go crazy, by snorkeling you can observe numerous colorful fish of all sizes. The fish are visible on each side of the rocks that emerge at the mouth of the lagoon.

In the central point where the water is highest you can see the bigger fish, but also the very small fish that can be seen in the rocks where the water is lower are very beautiful and colorful. If this is not enough, you can always participate in an excursion organized by the Reception to snorkel in one of the nearby bays.

If you are a swimmer smart enough you can swim across the arm of the sea that separates Cape Santa Maria from the lagoon (otherwise you can easily do it with the kayak), a short swim that takes you to a dream place …. white sand, water that it ranges from blinding white to cobalt blue.

Just before arriving on the beach about three meters from the shore I found a large five-pointed starfish. Take a walk along the beach to the point where some small mangrove seedlings start to pop up from the sea. When the sun comes out, the landscape is truly heavenly … The best hours for visiting the lagoon are the morning hours with the sun high, between 10 and 13. Then, before swimming again across the arm of the sea, you can also explore the beach facing the sea.

Cape Santa Maria is a paradise for lovers of walks along the beach: you have at your disposal a beach of almost 4 km in length to walk on ….

The walk along the beach of Cape Santa Maria is a 7 km round trip itinerary, which takes about 2 hours making many stops to admire the landscape. The path is almost all along the beach apart from a couple of detours that allow you to overcome some cliffs. The beach is made up of three sections: the first is the one where the Cape Santa Maria Resort is located. Then you reach a rocky ridge where there is a small house, here if you do not want to get wet you need to go on the cliff and walk in the plateau over the rocks because the sea reaches up to touch the rocks.

THE WALK ALONG THE BEACH

After a few hundred meters on the cliff you can reach the beach again, here are a couple of beautifully located houses along the beach, some of which are for sale. Once you reach the second rocky ridge, you overcome it in the same way as the first and then at the height of a large villa continue along the last long stretch of beach.

The beach ends on the promontory where a house stands in a splendid panoramic position. In the garden of this house there are some old cannons. During your walk pay attention to the sea. I happened to see a sea turtle. In fact, on my way back from the walk I saw a little head emerge from the water and then a green and yellow fin, at first I didn’t understand what it was, but then I realized that I had seen a sea turtle. Along the beach there are many beautiful shells of various shapes. Looking for shells is another great pastime for children and adults.

Another activity to do in Cape Santa Maria is to use the kayak. With the Kayak you can go along the long beach of Cape Santa Maria and stop for a swim where we want or go to the wonderful lagoon located behind the Resort (I recommend visiting the lagoon between 10 in the morning and 13 in the afternoon when the light of the sun creates fantastic colors).

Once you enter the lagoon from the narrow arm of the sea that connects it to the sea, you enter a paradise of colors ranging from the white of the beaches to all the colors of the blue of the sea, a truly enchanting place. At a point at low tide, a spectacular strip of white sand forms. Here you can land on the beach located on the other side, see the remains of the old Cape Santa Maria lighthouse destroyed by a hurricane a few years ago or take the path that leads to the Columbus monument which is another must-do excursion.

Among the excursions to do in Cape Santa Maria, another absolutely to do is the one that leads to Sandy Cay in the Exumas islands: the island of iguanas. A coral island which is located about an hour by boat from Cape Santa Maria. There are spectacular sandbanks, crystal clear water, a rich vegetation and a beautiful local fauna, we have seen dozens of iguanas, a large wading bird, an eagle with its baby eagle bird and a beautiful shell. Here some scenes of the film “Pirates of the Caribbean” were shot.

The other airport, Deadman’s Cay is much further away, is located in the southern part of the island and is about 70 km (about 1 hour by car) from Cape Santa Maria. The most frequently served airport is Deadman’s Cay which has daily flights with Nassau from the Bahamasair, Pineapple Air and Southern Air Charter airlines. Stella Maris airport has daily flights with Nassau from Southern Air Charters.

2020-01-27
admin
Previous: Sandy Cay in the Exumas islands: the island of iguanas
Next: How to get to Barbados. Flights to Barbados