Home / Asia / Georgia / Sighnaghi and the Bodbe Convent in Georgia 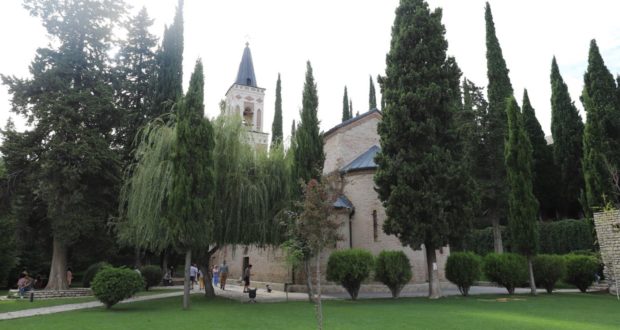 In the eastern end of Georgia near the border with Azerbaijan lies the beautiful town of Sighnaghi. The city lies on a hill about 800 meters above sea level in the center of the Kakheti wine area. From the town there are splendid views of the underlying valley of the Alazani river and if the sky is clear you can admire the snow-capped peaks of the Greater Caucasus in the distance. This well-known holiday resort is characterized by: houses with arcades and loggias, cobbled streets, typical restaurants, remains of the defensive walls of the XVIII century and finally by some historical buildings. A museum dedicated to archeology and ethnology completes the cultural offer of Sighnaghi. Finally, near Sighnaghi is the Bodbe Convent.

Bodbe Convent is located just 2 kilometers from Sighnaghi. Its origins date back to the fourth century, the period in which Saint Nino converted Georgia to Christianity. After the conversion of the country, the Saint withdrew to meditation in the area of the present monastery and died and was buried here. Shortly after the saint’s death in the 4th century, a first church was built above the tomb of Saint Nino. The current building was built between the eighth and ninth centuries and was heavily modified in the following centuries. Today’s structure has three naves with three apses and mainly incorporates the tomb of Saint Nino. Next to the ancient church there is a three-storey bell tower built between 1862 and 1885. Another larger and more recent church is located next to the old church.

The Convent as well as being a destination for pilgrimages from the origins due to the burial of Saint Nino, was also an important center of religious and educational life and played a significant role in the political life of the country. In the Middle Ages the kakheti kings were crowned in the convent. In Soviet times the convent was closed and the building was transformed into a hospital. Only in 1991 with the independence of Georgia was the convent reopened and restored.