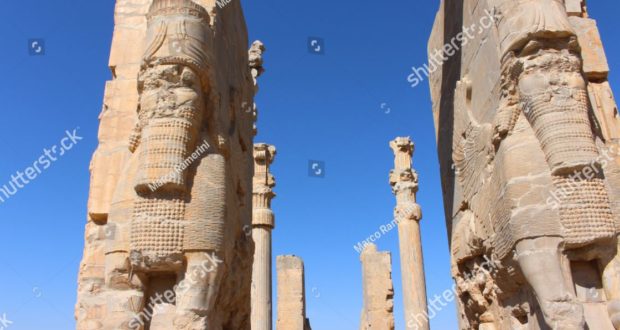 Gate of all Nations. Ruins of the ceremonial capital of the Persian Empire (Achaemenid Empire), Iran. Author and Copyright Marco Ramerini

Persepolis is the most spectacular archaeological site in Iran. This ancient city is located in southern Iran near the city of Marvdasht. About 60 kilometers north of the city of Shiraz. The city is above all an example of the Achaemenid style of architecture. The site consists of a raised terrace of 125,000 square meters. This terrace was built on a partially artificial platform and partly cut from a mountain. The terrace where the city stands is between 5 and 13 meters above the base of the ground below.

Persepolis was founded by Darius the Great (Darius I) in 518 BC as the ceremonial capital of the Persian Empire. The most important structure of the Persian capital is the Grand Palace. Built on a hill, it is accessed via two monumental staircases decorated with bas-reliefs. Access to the building is protected by a spectacular monumental gate built by Xerxes I, the Gate of All Nations.

THE APADANA: THE PALACE OF AUDIENCES

The Apadana, the Palace of Audiences, is the most beautiful building built in Persepolis. Work built in the first half of the 6th century BC was begun by Darius the Great and terminated by his son Xerxes I. The entrance to the palace occurs from two monumental staircases decorated with splendid bas-reliefs. The structure is built on an embankment. The heart of the building is a large square room with 60-meter sides and a series of 20-meter tall columns decorated with capitals with heads of bulls and lions. The Apadana was destroyed by the Macedonian troops of Alexander the Great in 331 BC. How much today remains gives only a minimal idea of the magnificence of this building.

THE TACHARA: THE PALACE OF DARIUS THE GREAT

South of the Apadana there is another monumental structure, the Palace of Darius the Great better known as Tachara or Winter Palace. The palace was in fact the exclusive building of Darius I in Persepolis. It was started by Darius I, but later terminated by his son, Xerxes I. This building is also accessed via a staircase adorned with bas-reliefs. Smaller in size than the other buildings in the city, however, this is the building that remained the most intact in Persepolis. In fact it was saved from the destructions perpetrated and the fire set by the Macedonian troops.

Persepolis is made up of many other buildings including the Tripylon, that is, the audience chamber of Xerxes I. This is a small building that was probably the entrance to the adjacent Palace of Xerxes also known as Hadish Palace. The Hadish is a large palace that had a large room with wooden and stone columns that have disappeared today due to the fire that destroyed Persepolis in 331 BC.

THE HUNDRED-COLUMNS PALACE: THE TRONE HALL

Among the most spectacular buildings in the Persian capital there was undoubtedly to be the Hundred-Columns Palace also known as the Throne Hall. This palace had a large square hall that measured 70 meters per side. Today, few structures remain to witness its magnificence. The building was badly damaged by the fire that burned Persepolis at the time of Alexander the Great.

On the rocky wall overlooking Persepolis there are some interesting tombs carved into the rock. Among these the most important are especially those of Artaxerxes II and Artaxerxes III both with the characteristic cross shape. From these tombs there is a wonderful overview of all of Persepolis. Persepolis is part of the UNESCO World Heritage Site. Finally, only 10 kilometers northwest of Persepolis are the rock tombs of the Kings of the Kings at Naqsh-e Rostam. Another spectacular testimony of the magnificence of the Persian Empire. While valuable reliefs from the Sasanian era can be seen at the nearby site of Naqsh-e Rajab.

2020-04-30
admin
Previous: Travel to Georgia: In the heart of the Greater Caucasus
Next: Journey to Easter Island: how to do and what to see