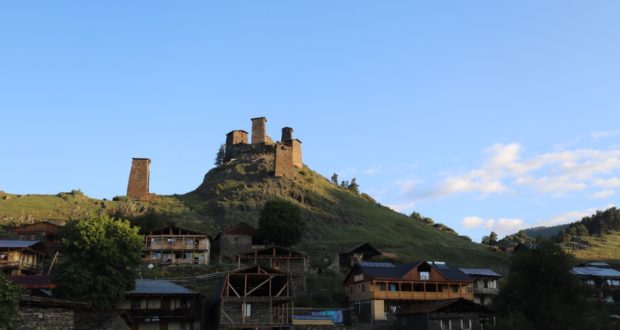 The beauty of Tusheti, one of the most pristine regions of the Greater Caucasus on the border with Russia, is also due to its isolation which makes it difficult to reach. The only road that reaches this region is passable only during the summer months with 4×4 vehicles. It takes about 5 hours to complete the 85 km route. Often this region of Georgia is excluded by tours that visit Georgia in just 8-10 days which instead concentrate the visit on other regions of the country that are more easily accessible. The scenery of the Tusheti, made of green pastures and mountains, is enhanced by the presence of some small villages that have remained almost intact. The most interesting villages in the Tusheti are those of Omalo, Dartlo and Shenako which are within easy reach of each other.

THE VILLAGE OF OMALO

Omalo is the largest inhabited center of Tusheti. It is located on a plateau at about 1,880 meters above sea level and consists of a lower village and some ruins on the hill where the scenic fortress of Keselo is located (2,080 meters above sea level). The village is the arrival point of the only road that connects Tusheti to the rest of Georgia. With the arrival of tourism, small guest-houses arose in numerous houses in the lower village, which unfortunately, for the most part, abandoned the use of stone roofs and replaced them with ugly sheet-metal roofs.

The most scenic place in Omalo is the fortress of Keselo which dominates the surrounding area from a cliff. The fortress is made up of 6 restored towers and the remains of other buildings of which only the lower parts are visible. According to the most accredited historical reconstruction, the defensive works and towers were built in the late Middle Ages during the Mongol invasion (13th century) and were subsequently used to defend themselves from the incursions of the inhabitants of nearby Dagestan.

About 8 km east of Omalo along a dirt road suitable for a 4×4. In about 30 minutes by car you can reach the village of Shenakho located at 1,870 meters above sea level. Shenakho is characterized by the presence of wooden and stone houses with nicely decorated balconies. The village maintains the traditional division between summer houses in the actual village and winter houses scattered near hay meadows down the hill. Just outside the village, in the area considered sacred even before the advent of Christianity, there is the Orthodox Church of the Holy Trinity. Next to the church there is a sort of altar with remains of sacrificed animals which testifies to the traces of the ancient animist religion.

THE VILLAGE OF DARTLO

At 14 km west of Omalo along a dirt road suitable for a 4×4 in about an hour it is possible to reach what in all probability is the most beautiful village in Tusheti: the splendid village of Dartlo. This village is located low in the Pirikiti Alazani valley at around 1,820 meters above sea level. Here there are some towers and beautiful traditional houses with wooden balconies which largely retain the splendid stone roofs. Next to the village are the remains of the church which lacks the roof and a wall. Next you can also observe the place where the meetings of the traditional court (Sabtcheo) were held where in past centuries justice was administered in these remote areas of the Caucasus mountains.

The climate of Georgia.

If you have time, a visit to the fortress-village of Kvavlo (2,150 meters above sea level), which is located a few hundred meters above Dartlo, is highly recommended. To reach it there is a steep path that from Dartlo reaches the fortress-village. Alternatively, it is possible to climb to altitude up beyond the village of Dano with a 4×4 car and from here along a short path not too difficult (only in one point those with vertigo problems may find themselves in difficulty) wade a stream and climb slightly uphill until in Kvavlo. In Kvavlo there are the remains of numerous buildings and a Guadia tower overhanging the rocky wall. Here you can also eat in a nice restaurant with spectacular views of the Pirikiti Alazani valley.

THE TRADITIONAL HOUSES OF THE TUSHETI VILLAGES

The houses in the Tusheti villages have a very particular architecture. Both the towers and the traditional houses were covered by a flat stone roof. The houses sometimes also have wooden balconies. While the roofs of the towers have a pyramidal shape due to the arrangement of the stones. The towers, which consisted of 4 or 6 floors, mainly served as sighting and defense. According to some sources, however, they were also used as houses where families lived. The animals lived on the ground floor and the women worked there. In the middle floors lived the families gathered around the fire the “kera” which divided the environment into two parts: the part of men and that of women. The upper floor, called “cherkho” was the dormitory for men and the watchtower.