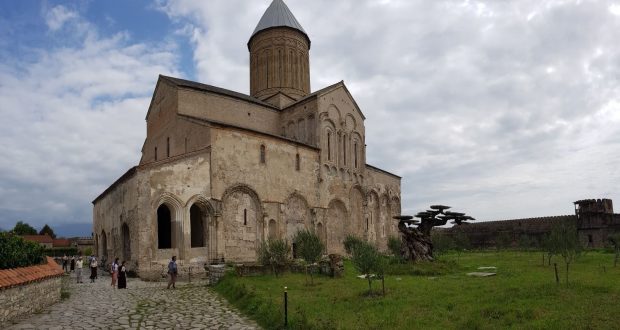 In the eastern region of Georgia known as Kakheti there is a splendid ancient Orthodox cathedral: the Alaverdi Cathedral. This beautiful stone structure rises along the valley of the Alazani river, along the northern bank of one of its tributaries, the Khodasheniskhevi river. The capital of Georgia Tbilisi is located about 100 km from the cathedral.

Alaverdi has ancient origins. It seems that before the advent of Christianity there was a pagan temple. A church was founded there in the second half of the 6th century by the Assyrian father Joseb who is buried inside the cathedral. Even the ancient kakheti kings were usually buried in this cathedral.

The current large structure was built by King Kvirike in the first quarter of the 11th century. Alaverdi Cathedral was damaged and looted several times in the past and was restored in the late 15th century. In 1742 a strong earthquake destroyed the dome which was quickly rebuilt shortly after, during the reigns of Queen Tamara and King Erekle II. Alaverdi was for centuries an important spiritual, cultural and educational center of Georgia and the main spiritual center of Kakheti.

The cathedral has monumental facades in the characteristic style of Kakheti churches. Inside there are fragmentary traces of the frescoes that once decorated the whole church. The frescoes visible today date back to different periods between the eleventh and seventeenth centuries. The cathedral and monastery are surrounded by an imposing city wall built between the 17th and 18th centuries.

Inside the walls, in addition to the cathedral, there are other structures dating back to different periods including: first of all, the bishop’s palace from the 16th century. Then the palace of Feikar Khan, who was the governor of Kakheti during the Persian domination. Finally the wine cellars and the thermal baths.

For photographers: Attention the monks are particularly rude and careful not to take pictures (even without flash) inside the monastery.

The UNESCO tentative list page of the Alverdi Cathedral.

2020-01-04
admin
Previous: Villages of Tusheti in Georgia: Omalo, Dartlo and Shenako
Next: Sighnaghi and the Bodbe Convent in Georgia