Home / Asia / Georgia / The climate of Georgia: when to go to Georgia 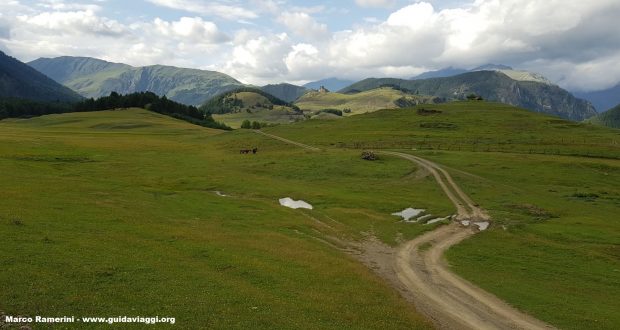 THE CLIMATE OF GEORGIA ALONG THE BLACK SEA

Along the Black Sea coast and in the western flat area, rainfall is abundant, with values ranging between 1,500 and 2,500 mm per year or more, and are distributed fairly evenly throughout the year, even if with a maximum of rainfall in autumn and early winter.

The sea water temperature in Georgia is warm enough for swimming from July to September and reaches 25 ° C in August.

THE CLIMATE OF EAST GEORGIA

In eastern Georgia the climate is much drier: in the capital Tbilisi less than 500 mm of rain fall per year, in this area the rainiest period is spring. During the summer, from June to August, in Tbilisi and in the inland valleys it can be very hot. Eastern Georgia has a subtropical to continental humid transition climate. Another variable that influences the climate of the nation is undoubtedly altitude. The highest areas of Georgia, those of the Greater Caucasus and Lesser Caucasus mountains, have a cool climate in the summer months and cold and snowy in the winter months.

THE CLIMATE OF THE MOUNTAIN AREAS OF CAUCASO

The Caucasus mountains and the secondary chains have an alpine climate, more or less cold depending on the altitude. Rainfall is particularly abundant in the westernmost mountains. The mountainous area of Svaneti, which is located not far from the Black Sea coast, is very rainy. Here, on average, between 1,000 and 3,000 mm of rain fall per year. The region is characterized by very intense snowfall in winter.

The lower altitude areas of Svaneti are characterized by long hot summers and relatively cold and snowy winters. Increasing in altitude, areas above 2,000 meters above sea level have a climate that presents short and cool summers and long and cold winters. However, most of this region is over 3,000 meters high, at these altitudes there is no real summer but the climate is cool even in the hottest months. Thanks to its proximity to the Black Sea, the Svaneti region does not have extremely cold winter temperatures which are characteristic of the high mountains.

In Tusheti, the innermost region of the Caucasus mountains, the climate is generally cold for most of the year. Snow is frequent. This area also belongs to the alpine type of mountain climate. The average annual temperature is 5 ° C. While the average temperature in July is around 14 ° C. In this area the annual rainfall amounts to values varying between about 450 and 900 mm and the rainfall falls mainly in the form of snow during the winter. The only months possible for a visit to Tusheti are the summer months.

WHEN TO GO TO GEORGIA?

The best time for a travel to Georgia is the spring and summer months, that is, the months from May to September. In the summer months the mountain areas of the country have a cool climate similar to that of the Alps. July and August are the best months for hiking in the mountains. If you want to take a seaside holiday along the Black Sea coast, the months between June and August are excellent.

2019-12-31
admin
Previous: The climate of Manila: when to go to Manila
Next: Ha Long Bay: Vietnam’s natural wonder