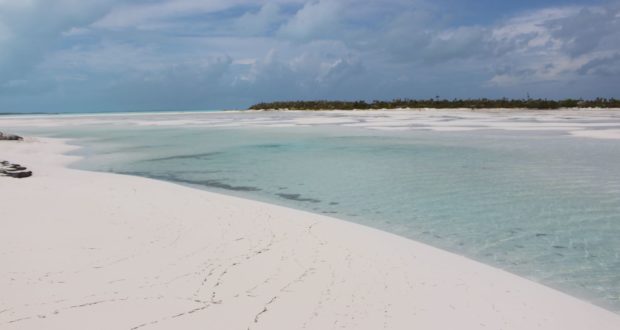 Sandy Cay is a small coral island in the Exumas islands that is located just south of the Tropic of Cancer. The island is made up of a series of coral islets connected to each other by sand banks that vary in shape with the changing tides. Sandy Cay is about 17 km from Little Exuma’s Tropic of Cancer Beach. While the town of George Town in Great Exuma is about 35 km away. By sea, the closest point of Long Island is only 20 km away. While the distance that separates the northern part of Long Island from Sandy Cay is about 30 kilometers which takes about an hour by speedboat.

This coral islet is known as the island of iguanas. In addition, some scenes from the film “Pirates of the Caribbean: Dead Man’s Chest” were filmed here. Sometimes the hotels in Little Exuma, Great Exuma or Long Island offer excursions to Sandy Cay. Their duration is variable, but generally the excursion starts around 9 in the morning to return to the respective starting points at 14.

The excursion is really beautiful and is certainly one of those not to be missed. We leave from our Long Island resort. We are alone, the four of us and our four excursion companions, two Canadians (Geoeff and Anne) and two Lithuanians (Aloysius and Mvda), and our two guides. As soon as we arrived in the bay of the island we were greeted first by a large wading bird. Then, once landed, by dozens of iguanas, very curious and not at all afraid.

The island, which is made up of some coral islets and numerous and spectacular sandbanks, presents itself in all its splendor with the sun. We have had this luck and we have been able to admire the beauty of the contrasts between the white of the sand, the blue of the sea, and the green of the particular vegetation that covers the coral islands, where the iguanas live. Most iguanas are found on the largest island which is covered in spectacular vegetation made up of small palm trees and shrubs. In the period in which we visited it, the colors of the vegetation ranged from the intense green to the ocher yellow of some leaves.

In front of this island there is a smaller islet with the same vegetation, but with fewer palm trees. Between the two islands there are spectacular sandbanks, walking along these strips of sand we find along the coast of the main island a large bird and a huge nest. We try to get closer, but the bird – which is a big eagle – emits warnings to warn us not to get closer. At least we interpret his scream like this. I take some photos which then reveal the reasons for the insistent calls…

We are immersed in nature, a spectacular nature. We walk along tongues of white sand that mingle with the sea – we are alone – among coral islands in unspoiled nature. Andrea discovers a large shell stranded on a sandbank. We walk along the sand banks, then along the beach of an islet. Finally we dive into the sea between white sand and pools of crystal clear water. Let’s stay in the water in front of this spectacular landscape as much as we can. Then we walk towards the point where our guides have placed umbrellas and chairs. The time to leave comes too early. Before leaving, on the initiative of our Canadian companion, we write our names on the sand.

On the way back we stop in the middle of the sea at the point where a ship was wrecked. Stranded in the coral reef are the remains of the ship, not far away, the guides tell us, another ship lies under the water. Who knows if under the sea among these coral reefs that emerge, there will also be the remains of a Spanish galleon and its treasures! We arrive in Long Island just south of Cape Santa Maria, where there is a private island – Hog Cay – with a beautiful beach. So we return to our resort on Cape Santa Maria Beach. Once in the room observing the photos taken with the eagle I discover the reasons for its screams, inside the nest, clearly visible, the head of a small eagle appears!

Sandy Cay is truly a place to visit for those staying in Little Exuma, Great Exuma or Long Island. This is an excursion not to be missed. Cross your fingers and hope it is a beautiful sunny day, otherwise a good part of the charm of the place is missing, but when the sun peeps it’s an authentic blaze! A spectacular place!

The climate of the Bahamas.