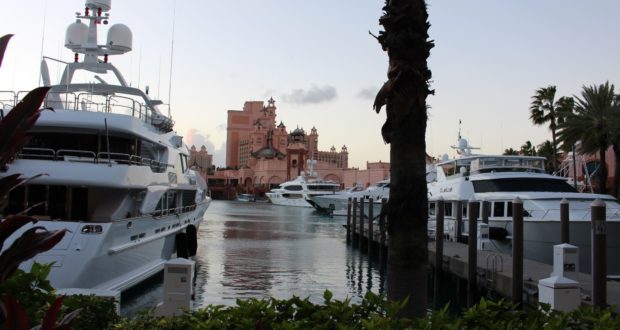 The island of New Providence is the most important island in the Bahamas. Here is the main city, the capital Nassau. Over 70% of the entire population of the archipelago lives on this island. Here are the main economic activities of the Bahamas, including numerous banks and commercial companies. On the island of New Providence there is also the most important international airport in the country.

After the discovery of America by Christopher Columbus the Spaniards nominally owned the entire archipelago of the Bahamas but never exercised effective control over it. It was not until the second half of the 17th century that the British founded the settlement of Charles Town – the current city of Nassau. Charles Town soon became an important pirate settlement and this provoked the reaction of the Spaniards who in 1684 attacked and destroyed the English settlement. In 1686 the British returned and rebuilt the colony, and in 1695 a fort was built to defend the settlement and the new town was named Nassau.

At the beginning of the 18th century Nassau had once again become an important lair of pirates, which provoked repeated attacks on the settlement by the Spaniards and the French. In 1776 – during the American War of Independence – Nassau was conquered by the Americans, who looted it and then abandoned it. In 1782 Nassau was again captured, this time by joint Spanish and American troops. The modern development of Nassau began in the late 18th century, with the influx of thousands of American loyalists and their slaves who settled here after the end of the American War of Independence.

Today Nassau is a vibrant modern looking city full of culture and modern amenities. Nassau’s reputation for duty-free shopping is legendary: you will find malls, boutiques, shops, and markets – like the Nassau Straw Market, located on Bay Street in the heart of the city. This market is famous for the quality and variety of local handicrafts such as hand-woven straw hats, bags, rugs, dolls, shell jewelry and wood carvings. If you decide to buy the important thing is to negotiate the price …

In the northern part of the island is Paradise Island, a place developed almost exclusively to delight and welcome visitors. Paradise Island boasts resorts, hotels, restaurants, shops, night clubs, a golf course, an aquarium (Atlantis aquarium), a huge water amusement park (Waterscape Aquaventure) and a casino (Atlantis Paradise Island). Atlantis Marina Village is an open-air mall with boutiques, shops and restaurants. The village is characterized by three interconnected squares and walkways that make it look like a charming old Bahamian settlement.

In the center of the city of Nassau there are some historical places that deserve a visit. Among these the three forts of Fort Montagu, Fort Charlotte and Fort Fincastle. The city center features typical pastel-colored houses and white government buildings including Parliament and the governor’s residence. Other places of historical interest are The Queens Staircase, the Gregory Arch and The Caves. The Pompey Museum is instead a museum dedicated to the history of slavery.

Among the places to visit in Nassau there are also some museums and gardens: in the heart of Nassau you and your children can relive the times of pirates at the Pirates of Nassau Museum a museum housed in three historic buildings in the city center that will make you retrace history of pirates in the Caribbean. The Ardastra Gardens and Zoo Conservatory are located a short distance from the city center where you can observe birds, reptiles and mammals. The attraction of the zoo is the flamingos that march following orders in unison. The Nassau Botanical Gardens are splendid gardens with more than 600 species of tropical flora.

For those who want to taste the typical Bahamian dishes – in particular the Bahamian Fish Fry – just west of the city center is the Arawak Cay Fish Fry. Here are a number of different restaurants and bars serving some of the freshest and most authentic Bahamian dishes. Located on the waterfront, the restaurants are housed in pastel-colored shacks, many of which have outdoor courtyards.

Among the public beaches of the island are those of Cabbage Beach on Paradise Island, and Jaws Beach, located at the western end of New Providence. Junkanoo Beach and Saunders Beach are located along the northern coast very close to the center of the city of Nassau.

HOW TO GET TO NASSAU

In the western part of the island is the most important airport in the Bahamas. The Lynden Pindling International Airport. The airport is located approximately 16 km (9.9 miles) west of downtown Nassau. There are daily flights to major cities in the United States, Central America, the Caribbean, Canada and the United Kingdom. The only direct flights from Europe are those from the UK. Domestic flights to other Bahamas islands also depart from Nassau airport.

As for sea transport, the port of Nassau is an important stopover for cruise ships. Bahamas Ferries connects the port of Nassau with the islands of Andros, Grand Bahama, Great Exuma, South Abaco, Long Island and Eleuthera by ferry.

The climate of the Bahamas.