Home / Central America / Bahamas / Long Island: the most scenic island in the Bahamas 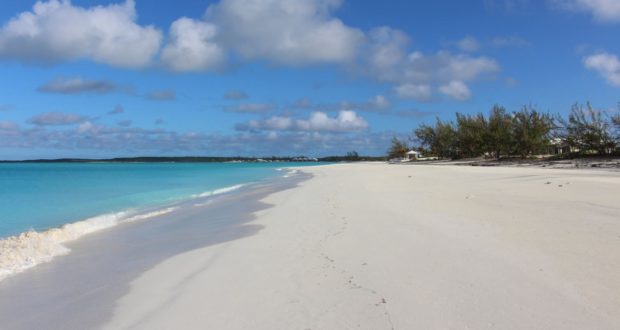 Known as one of the most beautiful islands in the archipelago, Long Island is located in the southeastern part of the Bahamas. The Tropic of Cancer runs through the northern part of the island. The island is about 130 km long and 6 km wide at its widest point – for a total area of 596 sq km. Christopher Columbus landed there in mid-October 1492 during his first trip. Here in the far north of the island there is a monument dedicated to the Genoese explorer and to the original inhabitants of the island the Lucayan. It appears that on this island he made his third landing in America after those on the islands of San Salvador and Rum Cay

Columbus called the island “Fernandina”, while the original inhabitants – the Lucayan Indians – called it “Yuma”. Columbus Point is the second highest point in the Bahamas. Instead the highest point of the archipelago is Mount Alvernia on Cat island which reaches 63 meters in height. From the top of the Columbus monument you can enjoy a spectacular view of the rocky cliffs and the tongues of white sand that mingle with the crystal clear sea. It takes little imagination to see the three caravels of Columbus in the bay below the monument. Since then very little has changed.

Long Island is characterized by very different coasts: along the east coast – the one facing the Atlantic ocean – there are caves and breathtaking cliffs where the waves of the Atlantic ocean crash. On the west coast – the one facing the Caribbean sea – there are quiet beaches of fine white sand protected by the coral reef. The island is a paradise for fishermen, divers and boaters.

The west coast of the island is quieter, here visitors will find soft white sand beaches that gradually slide into the beautiful turquoise waters of the Caribbean sea. Among the most beautiful beaches is Cape Santa Maria, a 4 km long strip of white sand and crystal clear sea, located on the side of the Caribbean Sea at the northern end of the island, where the Cape Santa Maria Beach Resort stands. On Long Island there is also the Dean’s Blue Hole, one of the most spectacular and the deepest marine blue hole in the world – it plunges 202 meters into a bay along the south-east coast of the island and has a diameter that varies between 25 and 30 meters.

Hamilton’s Cave is one of the largest caves in the Bahamas, this ancient cave system has passages 15 meters wide and a ceiling – in some places – over 3 meters high. Artifacts and cave drawings of the Lucayan Indian tribe – who lived in this cave over 500 years ago – were discovered here in 1936.

THE VILLAGES OF THE ISLAND

The population of the island is made up of about three thousand inhabitants – almost all of African origin – who live in small settlements, among them that of Deadman’s Cay – which is located in the center of the island – is the most populated. In the northern part there are the inhabited centers of Stella Maris – where there is also one of the two airports of the island -, Glintons Settlement, Burnt Ground Settlement and Simm’s Settlement where there is the small port where the ferries arrive.

To the south of Deadman’s Cay is the port of Clarence Town which overlooks the east coast. Architectural feature of Clarence Town are the Twin Churches. These are two similar churches built in the early twentieth century by Father Jerome Hawes. The first church – St. Paul’s Church – was built when Father Jerome Hawes was Anglican. While St. Peter’s & St. Paul’s Church was built by him after his conversion to Catholicism.

Between Deadman’s Cay and Clarence Town is the small Buckleys settlement where you must visit the interesting museum dedicated to the history and culture of Long Island and the Bahamas. The museum shows a cross-section of the traditions of the people of Long Island. Here you can see the life of the Long Island population from the pre-Columbian era to the present day. The building where the Museum is located also houses the Library and the Community Center.

A SINGLE ROAD THROUGH THE ISLAND

The island is crossed from north to south by a main road, which goes from Cape Santa Maria, on the northern tip of Long Island, to the settlement of Gordon’s in the southern tip. Taxis run between Stella Maris, Deadman’s Cay and Clarence Town. On Long Island, you can also choose to rent a car or scooter to visit the island. Some hotels also have bicycles available for their guests and it is also possible and pleasant to travel on foot for shorter sections.

The island’s weekly market – the Farmer’s Market – takes place every Saturday morning between 9 and 12 in the village of Salt Pond in the center of the island. Here the island’s products are sold including fruit, vegetables and indigenous Bahamian plants. Other products for sale include authentic Bahamian products including jewelry, crafts, paintings and straw bags.

The economy of the island is based on fishing, tourism and agriculture. Agriculture is generally that of subsistence. Peas, corn and bananas grow there. The inhabitants also raise small animals such as pigs, chickens, goats and sheep.

HOW TO GET TO LONG ISLAND

Long Island is served by two airports, Deadman’s Cay Airport (IATA: LGI) and Stella Maris Airport (IATA: SML). Both airports are connected by regular flights with Nassau – Lynden Pindling International Airport (IATA: NAS). The airlines that connect the island to Nassau are the Bahamasair, the Pineapple Air and the Southern Air Charter.

Long island is connected – usually by two connections a week with the Bahamas capital, Nassau and with George Town on the island of Exuma – via the Bahamas Ferry Service ferries, which stop in Simm’s Settlement port on Long Island. The time for the crossing from Nassau to Long Island is 14 hours including the stop in George Town on the island of Exuma. While between Long Island and Exuma the crossing time is 4 hours. In addition there are also two postal boats that connect the island with some nearby islands.

The climate of the Bahamas.﻿