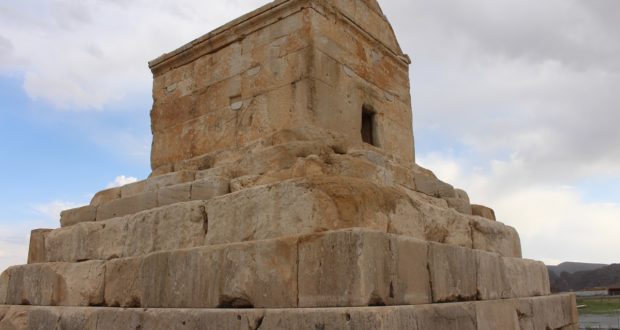 The city of Pasargadae is located in the current province of Fars in southwestern Iran, about 80 km north-east of Persepolis and about 130 km north-east of Shiraz. Founded by Cyrus the Great in the 6th century BC
Pasargadae became the first capital of the Persian Achaemenid empire.

Pasargadae was the capital of the first great multicultural empire of western Asia, this state extended over an immense territory that from the eastern Mediterranean and Egypt reached the valley of the Indus river and Lake Aral. The city is today an important archaeological site and in 2004 it was included among the UNESCO World Heritage Sites.

The archaeological site of Pasargadae covers about 160 hectares and presents some of the first manifestations of Persian art and architecture. In the architecture of the city the first examples of architectural synthesis of the representation of the different cultures and peoples that formed the vast Persian empire are visible. These architectural examples were later developed and brought to the top in the subsequent construction of the nearby city of Persepolis.

THE TOMB OF CYRUS THE GREAT

The city extended far beyond the current archaeological area and is still largely buried under the ground. Of the structures hitherto unearthed undoubtedly the most well-known building in the city is the so-called Tomb of Cyrus the Great. The structure measures 13 meters by 12 meters in total and is 11 meters high. The lower part is formed by a platform that rises with 6 high steps. The upper part of the building is made up of two rooms: the first, a square room, forms the real tomb, while the other is an attic. The actual tomb measures two meters wide, two meters high and three meters deep.

THE FORTRESS OF TALL-E TAKHT

Another very interesting structure from which you can get an overview of the city area is the fortress of Tall-e Takht. This structure, which is the oldest monument in the city, is located at the northeastern end of Pasargadae and is made up of a large fortified platform built on a hill overlooking the city and then incorporated into a citadel.

Probably built under the reign of Cyrus the Great (559 BC – 530 BC) it had various construction phases: the western wall of the base is very beautiful, and is composed of regular stones beautifully carved and assembled together without the use of mortar, but using metal clamps. This base, built during the reign of Cyrus the Great, was probably the basic platform for the construction of some royal palaces. Between the fifth and fourth centuries BC the structure saw a second phase of construction, in this period raw brick structures were built.

THE PALACE OF CYRUS THE GREAT

The remains of the Palace of Cyrus are located south-west of the fortress of Tall-e Takht, and are made up of two units: the white stone residential palace and an audience hall with columns. Completing the palace gardens with pavilions and a gateway. The Pasargadae gardens became the prototype for the Persian garden concept consisting of four quadrants divided by waterways or pedestrian paths.

In the vicinity of the Cyrus Palace, along the road leading to the fortress of Tall-e Takht are the remains of a building similar to the “Ka’bah” tower of Naqsh-e Rostam. The Pasargadae building is called “Zendan- and Soleyman” ie King Solomon’s Prison. The remains of a Muzzafaride caravanserai (14th century) are to the right of the Tomb of Cyrus. The caravanserai which was built with the stones of the Palace of Cyrus, has a rectangular plan and measures 18 meters by 16 meters.