Home / Asia / Iran / Rayen: a fortified town at the gates of the desert 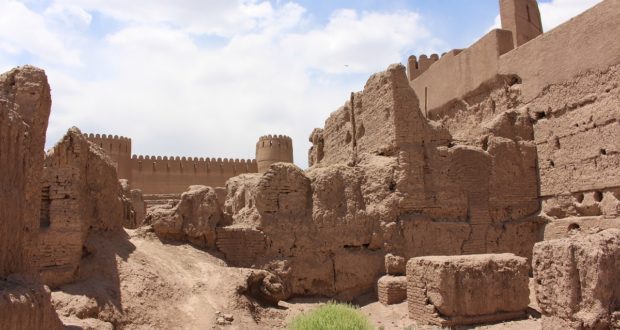 In the province of Kerman are some of the most beautiful fortified towns in Iran. These suggestive outposts at the gates of the Dasht-e Lut desert were merchant centers located along important commercial routes, where precious goods and quality fabrics were exchanged. Among the most beautiful examples of this architecture we find the town of Rayen. This splendid mud city after the destruction by a devastating earthquake of the nearby citadel of Bam has become one of the most interesting and visited destinations in this area of Iran.

Rayen is located about 100 km south of Kerman and is located about 2,200 meters above sea level near the Hazaran mountain range. This mountain range is an eastern branch of the Zagros Mountains, whose highest peak the Kuh-e Hazaran (Kūh-e Hazār) reaches 4,500 meters in height. The mountains of the Hazaran stand out suggestively behind the mud walls of the citadel of Rayen and are often covered with snow, creating a nice contrast with the surrounding desert landscape. The most famous city of Bam, largely destroyed by the earthquake at the end of 2003 and now being rebuilt, is located about 130 km further south.

A WONDERFUL EXAMPLE OF A CITADEL OF THE DESERT

Rayen presents all the architectural elements of a desert citadel and is very well preserved. Most of the houses have only part of the external walls, but one can easily imagine how the city looked at the time of its maximum splendor. In the inhabited center there are the remains of the houses of the population, shops, warehouses, cellars and a citadel of the governor. Rayen was famous in the past for the production of swords and knives and later also of pistols. In its surroundings there are chalk and marble mines. The waters that come from the snows that melt from the nearby mountains allow the cultivation of fruit and vegetables.

RAYEN WAS FOUNDED IN THE SASANID AGE

According to recent studies, Rayen’s foundation dates back to the 5th century AD. So the city was founded in the Sassanid era, but what we can see today is mainly from the Islamic era. Rayen’s citadel is smaller than Bam’s, covering an area of 22,000 square meters, but it is equally beautiful. The plan has the shape of an irregular square interspersed with 12 circular towers in one of which there is the only gateway to the whole citadel. Inside the town is divided by a wall with another circular tower. At the entrance it is possible to go up to the upper floor for a spectacular photograph from above of the town with its walls and with the mountains full of snow in the background.

Inside the citadel on the side of the walls opposite the entrance door. Consequently the one facing the mountains. There is also the square-shaped governor’s citadel with four round towers at the corners. This structure also has only one access gate. Inside there are several rooms that include the governor’s bedroom, his office, the rooms for official ceremonies and for guests. Through a staircase it is possible to go up to the upper floors to admire also from this side the whole of the walls of Rayen.

In the surroundings of Rayen there is a beautiful waterfall nestled in the mountains and surrounded by idyllic vegetation.

2020-01-05
admin
Previous: Naqsh-e Rajab: four bas-reliefs from the Sassanid era
Next: Meybod: a city at the gates of the Iranian desert