Home / Asia / Iran / Naqsh-e Rostam: the rock tombs of the Kings of Kings 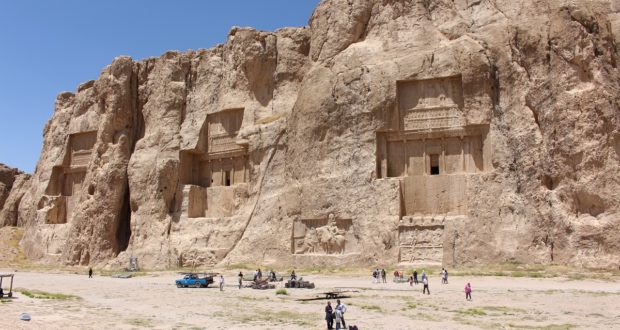 The tombs of Darius II, Artaxerxes I, and Darius I, Naqsh-e Rostam, Iran. Author and Copyright Marco Ramerini

Naqsh-e Rostam is one of Iran’s most important archaeological sites. It contains monuments erected by the kings of the Achaemenid and Sassanid dynasties during a period of time between 500 BC. and the 4th century AD. The site, located just 6 km north of Persepolis, was a place known since ancient times.. In fact, already around 1,000 / 700 BC. the Elamites carved a bas-relief depicting the king and his dignitaries in the act of worshiping some deities.

This bas-relief was badly damaged and largely removed by Bahram II who built another bas-relief in its place. Even today, a man with an unusual headdress is still visible from the ancient bas-relief. The man with the unusual headdress depicted in the bas-relief gave the Naqsh-e Rustam site its name. The name of Naqsh-e Rostam derives from the fact that in the past, having lost all memory of those who had erected these works, they were interpreted as representations of the Iranian mythological hero Rostam.

The presence of the ancient tombs of the Achaemenid kings, dug into the rocky wall a few tens of meters above the ground, and bas-reliefs from the Sassanid era make the Naqsh-e Rostam site a place that invites meditation. A unique, grandiose, suggestive and mysterious place. The tombs bring to mind the famous city of Petra in Jordan. This is the place, together with nearby Persepolis, where you can let your Indiana Jones fantasies go wild! The tombs are shaped like large crosses carved into the rock and are large: 23 meters high and 18 meters wide. Columns and bas-reliefs are carved on the facades of the tombs. At the center of the cross-shaped structure an entrance carved into the rock leads to the internal crypt of the tomb.

During the Achaemenid reign, Darius I the Great (522 BC – 486 BC) was the first Persian king to build a tomb cut in the rock face of Naqsh-e Rostam. Darius I, a few years earlier, near Naqsh-e Rostam, had founded Persepolis, the new capital of the empire. The tomb of Darius I is the only tomb of which we know with certainty the king who had it built and the one who was buried there. In fact, it is the only tomb on the site that has an inscription that identifies it as the tomb of Darius I. Of the other tombs we can only make assumptions about which kings were buried there. The tomb of Darius I is the third to the right looking frontally at the main wall of the site.

In front of the tomb of Darius II there is a stone tower-shaped building known as the ” Ka’ba-ye ” of Zoroaster. The structure has a square base of 7.30 meters per side. It is located on a platform made up of three steps and today stands a few meters lower than the current ground level.

The building was built during the Achaemenid reign, but its use is not certain, it could have been a Zoroastrian fire temple or a temple for the worship of kings. A similar building, although very poorly preserved, also exists in the city of Pasargade. In the Sassanid era, in the lower walls of the building, King Shapur I did write a trilingual inscription (in Middle Persian, Greek and Parthian) where he describes his genealogy, the extent of his empire and the victories he had against three Roman emperors (Gordian III, Philip the Arab and Valerian). The inscription also contains the names of his family members and courtiers. In the following years, the high priest Kartir also had an inscription placed on the eastern wall of this tower.

THE INVESTITURE OF ARDASHIR I

The first bas-relief in chronological order is the one depicting the investiture of Ardashir I (c 224 AD – 242 AD), the founder of the Sassanid empire. In the bas-relief there is also an inscription in which the term Iran is used for the first time in history. The bas-relief, located far from the tombs of the Kings of Kings, is in fact the last to the left of those found in Naqsh-e Rostam.

Under the tomb of Darius II there is another bas-relief still depicting Bahram II on horseback while fighting a Roman soldier. Under the tomb of Artaxerxes I there are two bas-reliefs, the lower one, in better condition, depicts King Hormizd II (c 302 AD – 309 AD) on horseback who fights with an enemy making him fall off his horse. Immediately above this bas-relief there is another very damaged one that seems to be King Shapur II (c. 309 AD – 379 AD) accompanied by some courtiers.

THE TRIUMPH OF SHAPUR I

Among the tombs of Artaxerxes I and Darius I is the most famous bas-relief of Naqsh-e Rostam, the triumph of Shapur I (c 240 AD – 270 AD), which represents the victory of Shapur I over two Roman emperors: Valerian and Philip the Arab. A third bas-relief of Bahram II, divided into two registers, is positioned immediately below the tomb of Darius I. Also in this work, in both registers, the king is depicted on horseback fighting with a Roman soldier on horseback. The last bas-relief of the site is located between the tombs of Darius I and Xerxes I, it represents the investiture of Narseh (c 293 AD – 302 AD) who receives the ring of royalty from a female figure.