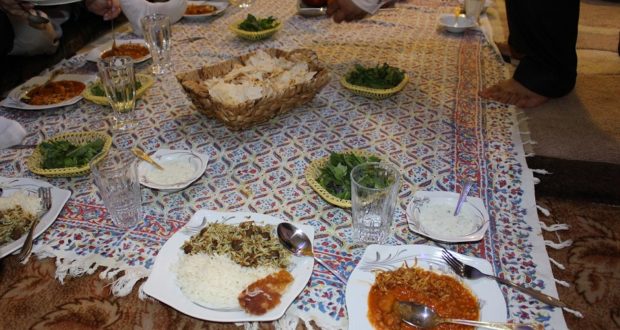 Iranian cuisine is very varied and its diversity reflects the variety of populations that inhabit the country. Iran is in fact inhabited by a large variety of ethnic groups: Persians, Azeris, Kurds, Lurs, Turkmen, Arabs, Balochi, Armenians, Georgians, Circassians, Assyrians etc. This diversity of ethnic groups and the influence of other neighboring cultures makes Iranian cuisine a very interesting aspect of a trip to Iran.

The rice (“Berènj”) is a basic element of Persian cuisine. The type of rice that is used in Iran is “basmati” or “dom’siah” which grows in the Caspian region. Rice that is usually steamed and can be seasoned with vegetables and fruit (in this case it is called “polò”). Or you can add some very elaborate sauces. While if it is in white accompanied with the “kabab” or with stews it is called “cielò”. In addition to rice, an important part of Persian cuisine is characterized by vegetables that are often accompanied with fruit. Among the most used fruits there are plums, pomegranates, quinces, apricots and raisins. The most used meat is sheep, beef and poultry. While for fish, trout and sturgeon are usually used.

Bread, called in Persian “nan”, is another ingredient that will always accompany you in your meals in Iran. There are said to be more than forty types of wheat bread in Iran: large focaccias are typical but leavened bread is also very common.

An Iranian lunch is traditionally served without a table, directly on the ground, usually on a carpet covered by a cotton tablecloth called “sofreh”. The appetizers usually represent the beginning of a Persian dinner, you will be served yogurt with garlic, olive sauce, cucumbers, green salad and carrots etc … The appetizers characterized by legumes and vegetables seasoned with yogurt are called “borani”.

Among the main dishes of Iranian cuisine the most common are those formed by the combinations of rice with meat “gusht” – such as lamb and chicken – or fish, with vegetables such as onions, in addition to the addition of various types of herbs and nuts. The meat is generally stewed “khorèsht” and seasoned with tomato ragout, fruit, dried fruit, spices and aromatic herbs – among the most common aromatic herbs chives, mint, parsley, estragon, coriander are used. As an alternative to meat stew, “kabab” is proposed together with rice, ie skewers of meat cooked on the grill. The “kabab” can be made from lamb, chicken, veal or mixed minced meat, it is usually accompanied by rice and salad.

“Khofteh” meat and legume balls flavored with spices are another delicious dish. “Mast” white yogurt is another basic ingredient of the diet in Iran and is used added to numerous dishes for both lunch and dinner. Another typical dish is chicken or duck stew in a walnut sauce and pomegranate syrup called “fesenjan” which is usually served with rice.

THE NATIONAL DISH: THE CHELOW KABAB

The “chelow kabab” is considered to be Iran’s national dish. It is a simple dish made of steamed saffron “basmati” rice and “kabab”, of which there are several distinct Persian varieties.

The “abgusht” lamb stew is accompanied by legumes and vegetables in a savory broth, the broth should be drunk separately as a soup and the rest must be crushed with a metal pestle. The traditional drink that is used to accompany “chelow kabab” is “dùgh”, a drink that is typical of Iran, made with sour yogurt diluted in a little water that is seasoned with salt and mint, and sometimes based of carbonated water.

Fruit is very present in Persian cuisine, depending on the season you will find watermelons, melons, pomegranates, oranges, strawberries, limes, apples, peaches, grapes. Pistachios, almonds, raisins, figs and dates are excellent among dried fruit (exquisite the biscuits with dates inside). Eggplants are another ingredient widely used in Iranian cuisine. Vegetables such as pumpkins, spinach, green beans, broad beans, courgettes, onions, garlic and carrots are commonly used in addition to rice and meat dishes. The use of potatoes, tomatoes, cucumbers, artichokes and peppers is also very frequent.

Iranian sweets are also excellent, although they are usually not offered in restaurants but can be purchased in the numerous shops and pastry shops in the cities. Traditional sweets are called “shirini khoshk”.

Every city and region of Iran has its typical dessert, in the city of Yazd the “shirini-e yazdi” are typical. Among the most famous are: biscuits with raisins and saffron “shirini-e keshmeshi”. A large biscuit usually with a nut or fig filling called “kolouche”. The “shirini-e berenji” which is a type of rice-based biscuit. The “shirini-e nokhodchi” which are clover-shaped biscuits whose main ingredient is chickpea flour. There are also French-inspired desserts which are called “shirini tar”. These desserts have whipped cream, whole milk as ingredients, and are usually decorated with glazed fruit. Some of these desserts are characterized by an Iranian touch, with the addition of saffron, pistachios and walnuts.

To break the day you can stop in the tea houses, which are a meeting place for the locals, to drink tea – which in Persian is called “chai” – with pastries and smoke the hookah. There are kiosks where pomegranate, orange or melon juices are made. Across Iran, including hotels, all alcohol is prohibited.

2020-01-05
admin
Previous: Jameh Mosque of Isfahan (Isfahan Friday Mosque)
Next: Tourist attractions of Iran: what to see in Iran