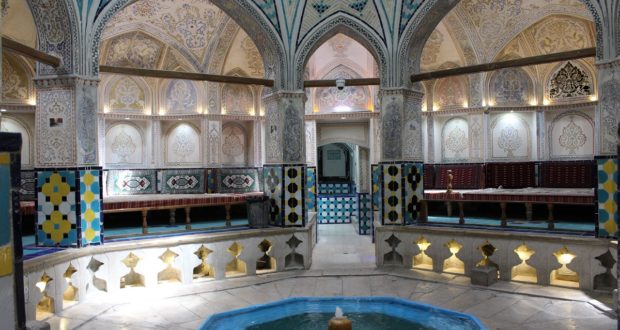 In Muslim ritual “hammam” (term that derives from the Arabic language) is the thermal complex in which Muslims perform the two washes of Islamic rituals. The “ghusl”, or full ablution, and the “wudu ‘”, or partial ablution. Both of these body washes serve to achieve “tahara”, that is, the state of purity of the body. This is an indispensable condition for being able to fulfill the obligation of “salāt”, that is, the ritual of daily Islamic prayer. One of Iran‘s most beautiful historical traditional Iranian public bathhouse is the Sultan Amir Ahmad Bathhouse which is located in the city of Kashan.

ONE OF THE MOST BEAUTIFUL PUBLIC BATHHOUSE IN IRAN

This ancient Persian public bathhouse covers an area of over one thousand square meters. It represents one of the most beautiful examples, in terms of architecture and decorations, of an ancient public bathhouse visible today in Iran. Its name derives from the nearby shrine-mausoleum of Sultan Amir Ahmad. While its construction dates back to the 16th century during the Safavid government. The building was subsequently renovated during the Qajar period (19th century) and consists of several rooms richly decorated with tiles, plaster and plaster.

The walls of the bathhouse are decorated with turquoise and golden tiles. The bathhouse is composed of various rooms, among which various rooms are highlighted. These include the counter, portal, entrance, connecting corridors, dressing room, main bathroom, cleaning room, tank, toilet and two wells. To maintain a correct internal temperature, the bathhouse were usually built below ground level.

The stone pavement in the bathhouse was always kept warm due to the passage of heat from the ovens and channels positioned under the building. Therefore the bathhouse did not need any other heating devices. Another masterpiece of the building is its roof. Characterized by small domes equipped with convex glass lenses which allowed a good illumination of the environment and at the same time prevented the curious from seeing the interior.

2020-01-04
admin
Previous: Pasargadae: the first capital of the Persian empire
Next: The Carpet Museum of Iran in Tehran