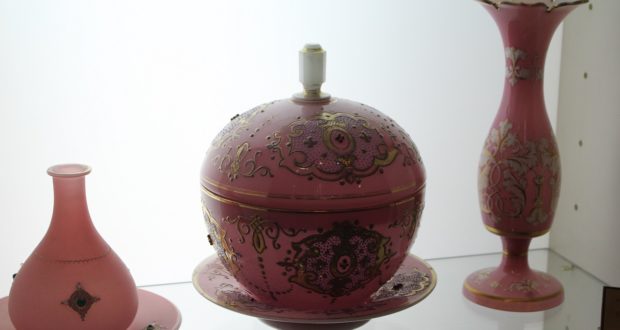 In the vicinity of the Archaeological Museum of Tehran (National Museum of Iran) there is a small museum dedicated to glass and ceramics: the Glassware and Ceramic Museum of Iran (also known as the Abgineh Museum). It is an interesting museum located in a beautiful mansion dating back to the early twentieth century. The palace belonged to Ahmad Qavam (Qavam-ol-Saltaneh), an Iranian politician who was five times Prime Minister of Iran between 1921 and 1952. Here the minister, until 1953, had his residence and his own office. Subsequently the palace housed the headquarters of the Embassy of Egypt.

In 1980, after the palace became state property, the current museum dedicated to ceramics and glass was set up there. The museum is an octagonal building on two floors and occupies approximately 1,000 square meters of surface. The building is immersed in a small garden of about 7,000 square meters of surface. The architectural style of the building is a combination of traditional Iranian style, with Indian influences and 19th century European architecture. The interior of the building has ceilings and walls decorated in plaster. On the walls there are tiles, inlays in cedar wood and mirror works. A beautiful wooden staircase connects the two floors of the building.

A RICH COLLECTION OF OBJECTS

An interesting collection of ceramic and glass objects is on display in the
Glassware and Ceramic Museum of Iran. There are mainly glazed terracotta vases decorated with geometric, floral and animal designs that date back to periods between the 4th and 1st millennium BC. Among the oldest glass works there are some dating back to the II and I millennium BC. These are mainly ornamental objects and perfume bottles. There are also works in both glass and ceramic and terracotta (plates, vases, flasks) from the Achaemenid, Sassanian and Islamic periods. Glass works from the 18th and 19th centuries from Europe are also part of the collection. The collection is exhibited in six rooms, two on the ground floor and four on the upper floor.

Inside the museum it is possible to take photographs without a tripod and also without a flash. Opening hours: The museum is open between 9:00 and 17:00 every day of the year. It is closed every Monday and on religious holidays.

2020-01-05
admin
Previous: The Carpet Museum of Iran in Tehran
Next: Naqsh-e Rajab: four bas-reliefs from the Sassanid era