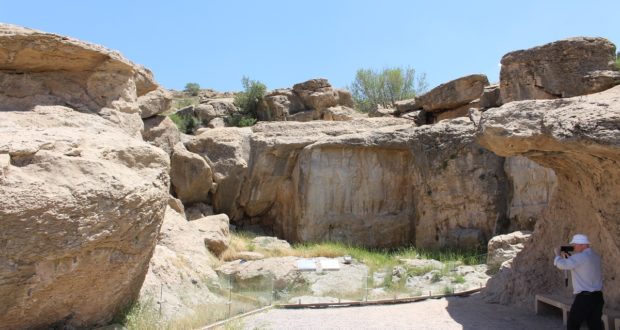 Naqsh-e Rajab is a small suggestive archaeological site located a few kilometers north of the spectacular imperial city of Persepolis and less than a kilometer south of the site of Naqsh-e Rostam, where the tombs carved into the rock of the Achaemenid kings are found. In Naqsh-e Rajab there are four bas-reliefs from the Sassanid period on a limestone wall. Together with the archaeological site of Naqsh-e Rostam, the Naqsh-e Rajab site is included in the UNESCO “Tentative List” to become a world heritage site.

Located in front of the entrance, the first bas-relief dates back to the era of the founder of the Sasanian empire, Ardashir I the unifier, who ruled the empire between 224 AD. and 240 AD. The bas-relief shows Ardashir I receiving the ring of royalty from Ahura Mazda. Both characters are in an upright position and the king receives the ring of royalty from the hands of the god. Among them are two small-scale figures, one is Prince Bahram, grandson of the king, the other figure represents Izad Bahram the Iranian divinity of warriors who appears in the Hellenistic appearance of Hercules. Behind the king are a high-ranking official with a flyswatter and the heir to the throne, Prince Shapur.

To the left of the bas-relief representing the investiture of Ardashir I there is a smaller bas-relief in which the bust of Kartir, an important priest of the early Sassanid period, is represented. A long inscription in Middle Persian or pahlavi (Persian language used in the Sassanid era) describes the rise to power of the priest during the reigns of Shapur I (240 AD – 270 AD), Hormizd I (270 AD – 271 AD) and Bahram I (271 AD – 274 AD).

A second bas-relief, located on the wall to the right of the bas-relief of the investiture of Ardashir I, also depicts the investiture of a king. In this case it is the successor of Ardashir I, Shapur I the Great (240-270 AD) who receives the ring of royalty from Ahura Mazda. Both characters are represented riding a horse. This bas-relief is quite damaged, but its workmanship is superb.

Shapur I is also represented in another bas-relief, located on the far left wall. Here Shapur I is on horseback, followed by members of his family and the highest dignitaries of the state. All these characters are represented standing, only the king is on horseback. A trilingual inscription on the horse of Shapur I allows the identification of the king. While the other characters can only be identified through the sign in their headdresses.

2020-01-05
admin
Previous: Glassware and Ceramic Museum of Iran in Tehran
Next: Rayen: a fortified town at the gates of the desert